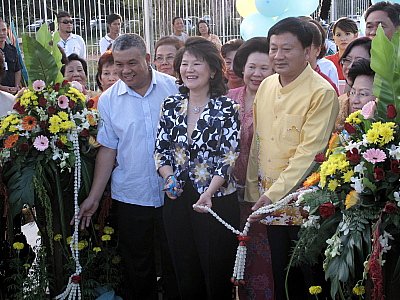 The opening of the new road, temporarily named Sai Phang Muang Khor, took place with a Christmas Eve ceremony complete with a parade and marching bands.

Leading the procession along the thoroughfare was the Phuket Wittayalai School marching band, who were followed by members of the Thai Peranakan Association in traditional attire.

Lining the road from 4pm to 11pm were vendors selling plants, refreshments and handicrafts made under the government’s One Tambon One Product (OTOP) initiative.

The new road, which connects Chao Fa East Road and Sakdidet Road Soi 1, provides a much faster route between Suan Luang Park and Saphan Hin than was previously available.

Phuket City Municipality has yet to decide on an official name for the road, said the mayor.

“There may be a contest for the public to suggest names that we can choose from,” she said.

Notice to our readers re New Year’s holiday office hours