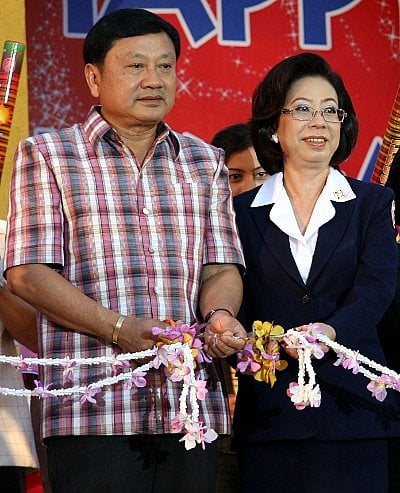 The news was announced last week when Gov Tri met a delegation from the Thai Peranakan Association led by its President, Dr Kosol Tang-Uthai.

During the meeting, which focused on details of the upcoming “3rd Baba Wedding 2011”, Dr Kosol popped the question to Gov Tri: Would he and his wife join the festival and renew their wedding vows?

Dr Kosol explained that the event, to be held on June 10 and 11, had already gained the support of the Tourism Authority of Thailand (TAT) office in Phuket.

The first day will be spent as an “orientation session” for couples taking part.

On the morning of June 11, the couples will gather at the Governor’s Mansion on Narison Road in Phuket Town, where they will start their parade through the streets in full Baba Pernankan wedding regalia.

The colorful procession will then proceed along Thalang Road, ending at the Thai Hua Museum at noon.

In the evening, wedding celebrations will be held at the Hongyok Mansion on Thepkrasattri Road.

Packages for couples to marry during the festival cost 50,000 baht, including a one-night stay at the Phuket Merlin Hotel on June 10; the wedding ceremony; wedding attire; and a “honeymoon stay” on June 11 at a beach resort yet to be determined, he added.

“Six couples, including Thais and foreigners, have already registered to take part. We expect 10 to 15 couples in total,” Dr Kosol said.

More information will be released at an official press conference on June 1, he added.

“This is not for money. We want to preserve Phuket culture,” Dr Kosol affirmed.