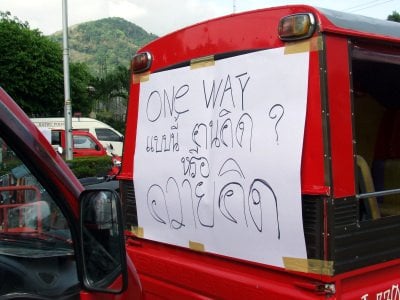 PHUKET: More than 100 Phuket tuk-tuk drivers staged a protested at Kathu Police Station yesterday afternoon, calling for changes to be made to the new one-way system in Patong.

To hear their grievances, Kathu Deputy Superintendent Lt Col Kittipong Klaikaew jammed 45 of them into a meeting room at the station.

Mardlee “Bang Lee” Sawangpon, 56, spoke on behalf of the drivers as “advising president” of an independent band of drivers who call themselves the Tuk Tuk Club. This group is not a part of the Patong Taxi Federation run by Preechavude “Prab” Keesin.

“I have been on the road for 23 years and I know a lot about traffic – and, for sure, the current system is making traffic jams worse,” Mr Mardlee said.

“I know the previous system was strange and it confused tourists. Even I nearly hit a BMW once, but this one is making traffic worse,” he added.

Kathu Traffic Police Chief Lt Col Jakkawat Boontawegunsawat explained to the drivers that, “the present system is in its ‘test phase’ for one month [starting January 15].

“After that we will have a public hearing to get feedback from all people who use the road before making any final changes to the road system.”

However, the drivers said they wanted confirmation that the current system will not remain after the test phase is over.

They even presented Lt Col Kittipong a draft plan of what they propose the system to be.

The plan showed the traffic flow almost exactly as it was years ago. In that configuration, the traffic headed south along the beach road and north along the parallel main artery Rat-U-Thit 200 Pi Road, with all streets in between the two being two-way, except for Prabaramee Road and Prachanukroh Road at the northern and southern ends of Patong’s central traffic grid.

Lt Col Jakkawat said he would arrange for the drivers to join a meeting on Monday to be attended by officers from Patong Municipality and Kathu Police.

He also asked them to bring their draft plan and a letter formally requesting the changes to be made so they can be presented to Patong Mayor Pian Keesin or his representative at the meeting.

test entering do not delete