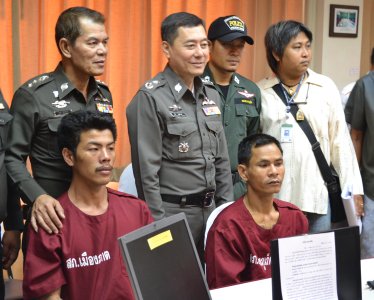 PHUKET: Has your home-office been ransacked lately? Do you want your PC or laptop back? Then pop on down to Phuket City Police Station where more than 60 stolen consumer goods are waiting to be reclaimed.

Police recovered 66 IT consumer goods after a drugs investigation led officers to raid a house in the National Housing Authority development in Rassada yesterday afternoon.

Although no drugs were found, officers seized drug paraphernalia and discovered a suspiciously large number of IT goods, including laptops, PCs, computer screens, TVs, DVD players and digital cameras.

At a press conference today, Maj Gen Pekad said the men had confessed to robbing many home-offices in Muang District and Kathu.

The pair targeted businesses with glass pane windows which they removed with a single screwdriver, he explained.

“Aon and Sam had been working together to commit thefts for three years,” he added.

After the men confessed to the robberies, police were able to recover most of the stolen goods.

“We sold the stuff at cheap prices just so we could get money to buy more drugs,” Sam told the Gazette.

Maj Gen Pekad said that so far five people have identified and reclaimed their stolen items.

“Anyone whose property has been stolen are advised to come to Phuket City Police Station to look for their belongings by asking for Superintendent Wanchai Ekpornpit,” Maj Gen Pekad said.

“Also, anyone who has bought stolen items from these two men are advised to return the items at Phuket City Police Station. We will not file any charges if they return the stolen goods to us. Then we will can find the real owners of the stolen items and return them,” he added.