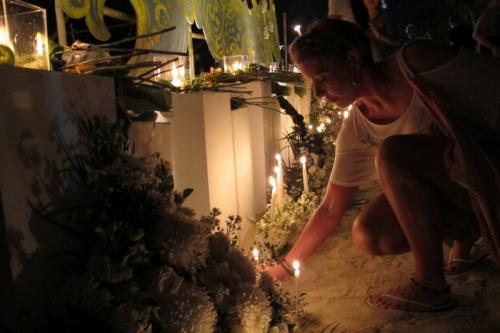 PHUKET: Patong Beach was set aglow last night as hundreds of local residents and tourists joined the annual Light Up Phuket memorial service to honor those who died in the tsunami that struck the island eight years ago.

Thai official figures state that the tsunami killed over 5,000 people and more than 3,700 disappeared in the waves that struck the Andaman coast in 2004.

After observing a minute of silence to remember those lost to the waves, families and friends joined together in placing lit candles along the beach to honor the victims.

Bernard Ledter, 64, from England, lost a Thai friend to the tsunami.

“I came here to remember my first Thai-language teacher when I first came to Phuket to do business in Kamala. Her house was not too far from Kamala Beach.

“I was in the UK when the tsunami hit. I called Thailand to see if she was okay. Her husband told me that she had been killed. Her husband said that she asked him and their daughter to go to the shop to buy some things, and then the wave hit while she was in the house alone,” he recalled.

“I took this chance to honor her and the other victims. I will always think of her even though I cannot make it [to the memorial service] every year,” Mr Ledter added.

Tomas Fris, 64, from Sweden, was staying at a beachfront hotel in Patong while on holiday in December 2004.

“I was not in Patong when the waves hit. I left Patong at 5am on December 26, 2004. That was my luck. I was staying in a hotel next to Patong Beach,” he explained.

“This year we decided to come to Phuket to honor the victims as we had heard that they hold this event in Patong,” she said.

“Even though we did not lose anyone we know, the victims were our friends and we must remember them and make merit for them so their souls will rest in peace,” Mrs Sirion added.