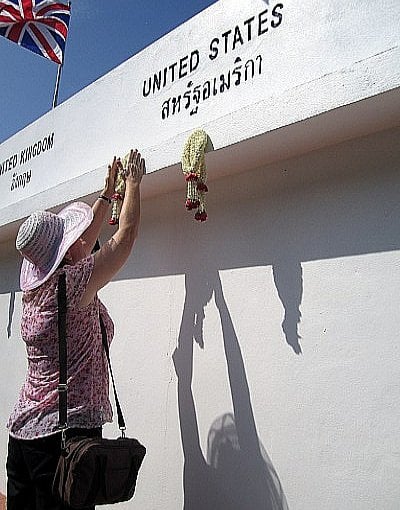 PHUKET: A somber air hung over the tsunami memorial service at the Tsunami Memorial Wall in Mai Khao this morning as about 50 people turned up to remember those lost to the killer waves that struck Phuket in 2004.

Thai official figures state that the tsunami killed 5,398 people and more than 3,700 disappeared in the waves that day.

Hundreds of them died or disappeared in Phuket. In Phang Nga province, north of Phuket, the deadly tally numbered in the thousands.

The Phuket service this morning began with Buddhist monks conducting a mass prayer, followed by a Muslim service and then a Christian service.

After the religious ceremonies, attendees approached the wall to lay wreaths in memory of those killed.

Long-term Phuket resident Larry Amsden, 73, has lived in Phuket for decades. He has attended every memorial service since 2004.

“I had many friends who were victims of the tsunami, among theme were two American friends and four Thai friends.

“I almost lost my wife to the tsunami. She was down at the market [when the waves struck]. She had to run away from the water. I was very lucky,” Mr Amsden told the Phuket Gazette.

“At that time I had a small business in Kathu, but my home is in Patong. We could see the tsunami from my home,” he added.

Mr Amsden explained that he and fellow members of the Rotary Club of Patong Beach immediately launched relief efforts.

“We tried to help people restore their lives. Do whatever we could to help them get back to a normal life,” he said.

“I’ve come here every year for the memorial, since 2004, and I will come every year,” Mr Amsden said.

He added that he was “happy” with the restoration of the Wall of Remembrance recently carried out by the US Navy League, sailors from the USS Pinckney and the Glenn Defense Marine.

“Now the wall looks much better. I am very proud of the wall,” Mr Amsden said.

Activities to mark seven years since the tsunami struck continued this afternoon at Loma Park in Patong, where a panel of experts led by Dr Smith Dharmasaroj, former head of the National Disaster Warning Center, staged a public discussion on disaster management.

Tonight, thousands of people are expected to light candles and place them in the sand along Patong Beach as part of the annual ‘Light Up Phuket’ remembrance tradition.