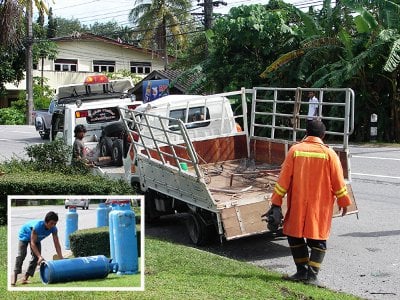 PHUKET: A tire blowout on a delivery truck left Phuket’s central artery strewn with 45 filled gas cylinders this morning. Fortunately none of the vessels exploded and there were no serious injuries.

The accident occurred at around 9am on Thepkrasattri Road southbound in Mai Khao, near the entrance to Blue Canyon Country Club.

By 9:30am local police, firefighters and rescue workers were already at the scene, where the delivery truck spun 180 degrees and came to a stop facing oncoming traffic.

Although none of the cylinders exploded during the accident, Thepkrasattri Municipality firefighters doused the metal tubes with water as a precaution while Thalang Police directed traffic.

The truck belonged to the Andaman Gas Company, based over the Sarasin Bridge in Phang Nga. It was delivering the cylinders to restaurants in Phuket at the time of the blowout.

The sudden puncture of the left back tire caused a high-speed spin that sent the tanks flying in all directions from the vehicle bed onto the road.

Workers from the company arrived at the scene in another truck to collect and inspect the cylinders, only one of which was found to be leaking. The clean-up operation was complete and the road reopened to traffic by 10am.

Andaman Gas worker Anusak Suansri told the Gazette the tanks each contained 48 kilograms of compressed gas, for a total weight of 90 kilograms each.

Fortunately traffic was light at the time and no other vehicles ran into the cylinders.

The truck driver and a co-worker in the vehicle at the time were taken to Thalang Hospital for examination. Bruises were the only apparent injuries.

Phuket IT update: ‘Facebook for Business’ seminar on Saturday