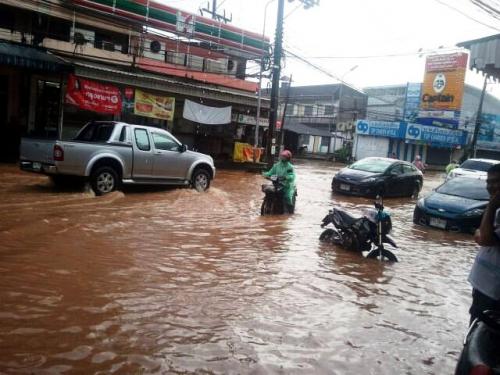 PHUKET: Many parts of Phuket Town were briefly underwater yesterday in the wake of a ferocious three-hour morning rainstorm.

A number of roads were flooded and the Bang Yai Canal threatened to burst its banks.

“The rain fell heavily and continually for three hours, causing floods as water could not be drained out quickly enough,” Mayor Somjai told the Phuket Gazette.

“However, Phuket Marine Police and Phuket City Municipality staff were able to pump the floodwater out in an hour,” she said.

Officials inspecting housing areas near the canal for flood damage found that there was none, partly because residents had moved their belongings to higher ground and taken other precautions.