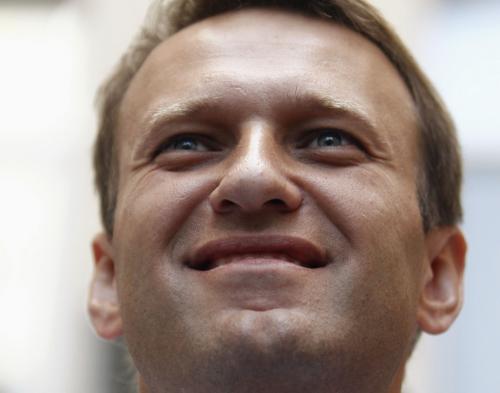 Initial partial results allowed Sergei Sobyanin to say he was certain of victory though they showed him just topping the 50 percent barrier needed to win outright.

Vowing not to let a “single vote be stolen”, Navalny said his campaign team’s figures showed Sobyanin had fallen short of the mark and that he should face him in a second-round runoff.

The results put Navalny on just under 27 percent but he said his real support was at 35 percent. His remarks raise the prospect of a new electoral dispute in Russia after anti-Putin protests stalled last year when the former Soviet spy was re-elected and took a tough line on dissent.

“We do not accept the results that are being announced, and we will not give up a single vote that we received,” said Navalny, a 37-year-old anti-corruption campaigner who emerged from anti-Putin protests last year as the opposition’s leader.

“I call upon the Kremlin and the Moscow mayor’s office to renounce falsifications and take the election into a second round,” he said, urging volunteers at polling stations across the capital not to let “a single vote be stolen.”

With more than 32 percent of the vote counted, the early results gave 55-year old Sobyanin 52.09 percent of votes and Navalny 26.65 percent. Two exit polls earlier put Navalny on about 30 percent of votes.

A low turnout of around 33 percent helped boost his numbers because the young people who form the bedrock of his support voted in droves and there was less mobilisation among elderly, more conservative voters.

Even if Navalny’s challenge of the outcome does not succeed, such figures strike a blow for the opposition after a Western-style campaign that appeared to take the Kremlin and Navalny’s rivals by surprise with its energy and professionalism.

“We’ve both voted for Navalny. We like some things about him but first and foremost we really don’t like the authorities,” said Irina, a woman in her 40s who works in manufacturing and voted with her father.

Several voters who chose the white-haired Sobyanin said they had done so because they had seen improvements in the city since he took office. He has put up buildings and spruced up the city centre with pedestrian walkways.

“There is no need for any change, everything is fine here. He’s got serious experience now, he’s well into this job. I like the way he works and want to see more of the same,” said a middle-aged man who gave his name only as Yevgeny.

Political observers say the Kremlin let Navalny run for mayor in the belief that he would suffer a humiliating defeat after being convicted of theft in July and sentenced to five years in prison, pending an appeal.

Allowing Navalny to run – and lose – would have increased Sobyanin’s legitimacy, went the argument.

In a highly unusual ruling, a court in the city of Kirov released Navalny on bail the day after he was sentenced to allow him to run in the election in the capital, whose 12 million inhabitants account for more than a fifth of the Russian economy.

A pro-Navalny rally is planned Monday evening on the same Moscow square where he helped lead anti-Putin protests that erupted following allegations of widespread fraud in a December 2011 parliamentary election won by Putin’s ruling party.

Navalny aides alleged that Moscow authorities increased the vote for Sobyanin by adding people to voter lists at the last minute and manipulating mobile polling stations designed to let people confined to their homes cast ballots.

Election officials said no major violations had been recorded.

If Sobyanin’s first-round win is confirmed, Putin will have a close ally at the helm in Moscow until after the 2018 presidential election, in which the former Soviet KGB spy has not ruled out seeking a fourth term.

Sobyanin, a former head of the presidential administration and ex-governor of Siberia’s oil-rich Tyumen region, was appointed mayor by the Kremlin in 2010 for a five-year term.

But he cut his term short and called an early election in a bid to boost his legitimacy and that of the Kremlin, which is trying to strengthen its hold on power after the protests.

Sobyanin is a senior member of the ruling United Russia party, which Navalny has denounced as a party of “swindlers and thieves” – a phrase that caught on over the Internet among opposition-minded Russians.

Speaking to reporters after meeting Arab foreign ministers, U.S. Secretary of State John Kerry said many were leaning toward supporting a G20 statement – already signed by 12 nations, including Saudi Arabia – that called for a strong international response following an August 21 chemical attack in Syria.

Washington and Paris say forces loyal to President Bashar al-Assad were behind the attack in which more than 1,400 are estimated to have been killed, and they are considering air strikes to try to deter him from using such weapons again.

Kerry told a news conference that Saudi Arabia, which has been one of Assad’s most vocal opponents and diplomats say is one of the main suppliers of arms to the Syrian rebels, “supported the strike and they support taking action.”

French President Francois Hollande, increasingly under pressure at home and among European partners to seek a U.N. mandate before any military intervention in Syria, suggested on Saturday he could seek a resolution at the Security Council despite previous Russian and Chinese vetoes.

French officials say a draft resolution presented jointly by Britain and France at the end of August was not even read by Russia and China, let alone discussed.

U.N. inspectors are likely to hand in their report later this week as the U.S. Congress debates whether to allow limited strikes on Syria.

No decision by Obama

“On President Hollande’s comments with respect to the U.N., the president (Obama), and all of us, are listening carefully to all of our friends,” Kerry said. “No decision has been made by the president.”

After the news conference, a U.S. official said Washington was not seeking a Security Council vote at the moment.

“We have always supported working through the U.N. but have been clear there is not a path forward there and we are not currently considering proposing another vote,” said the official, who spoke on condition of anonymity.

Kerry’s meeting with Arab ministers, including from Bahrain, Egypt, Kuwait, Saudi Arabia and the United Arab Emirates, followed talks in Lithuania with European foreign ministers, who blamed the attack in Syria on Assad but urged waiting for the U.N. inspectors to report before any action.

“All of us agreed – not one dissenter – that Assad’s