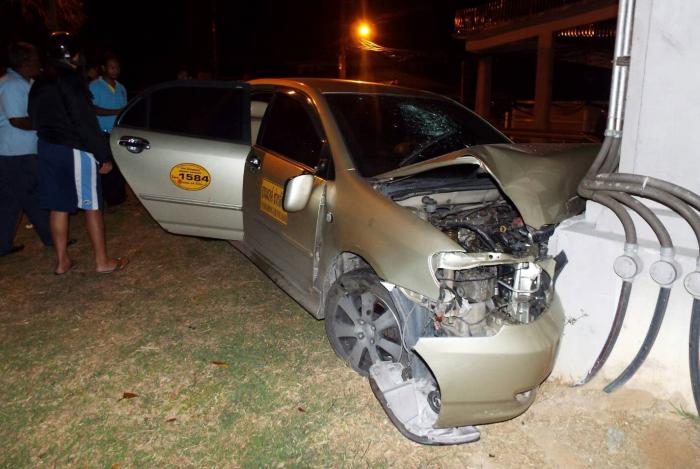 PHUKET: A taxi driver was injured after he fell asleep at the wheel and crashed into a concrete pillar in Thalang early this morning.

Two Chinese tourists sitting in the taxi sustained minor injuries due to the impact with the pillar of a pedestrian crossing bridge in the area.

“The collision occurred on the northbound Thepkrasattri Road near Muang Thalang School at about 4am. The Toyota was pretty banged up from the front.,” said Lt Sunan Petnhu of Thalang Police.

The tourists named Ruan Huiqiang and Ying Leyan, both 23-years-old, were bruised and shaken, while the driver, named Thornpon Seewan, 32, sustained injuries on his head and chest. The trio was taken to Thalang Hospital for treatment.

“Mr Thornpon told us that he had picked up the tourists from Patong and was heading to Phuket International Airport. He said that since it was early in the morning, he fell asleep and lost control of his taxi,” Lt Sunan told the Phuket Gazette.

The driver was charged with reckless driving causing injuries and property damage and will be taken to the Thalang Police Station after recovering at the hospital.