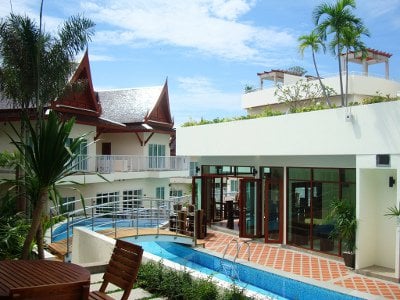 PHUKET: The electrocution of 45-year-old Russian tourist Fedor Samsonov at a high-end Phuket resort last night has prompted an investigation by police and a full-scale safety inspection of the resort’s electrical system.

“This is very tragic and we feel very much for the family,” said Lars Ydmark of resort management company Tri-Asia, which manages the Dewa Karon Beach Resort.

The incident was caused by an unsecured wire on the bridge over the pool, he explained.

“There were never any wires in the pool,” he added.

Chalong Police Deputy Superintendent Boonlert Onklang arrived at the resort with rescue workers from the Phuket Ruamjai Kupai foundation after receiving the report at 8:30pm.

“A section of power cables was exposed, which we believe caused the incident,” said Chalong Police Acting Superintendent Sirisak Wasasiri.

“Obviously, there was no intent to cause anyone harm, but we are continuing our investigation,” he added.

Mr Samsonov, wearing his swimming trunks, grabbed the metal rail of a footbridge over the pool, and suffered a fatal electric shock, said Col Sirisak.

Restaurant Manager Surasak Phetsut, 33, rushed to his aid and tried to pull Mr Samsonov from the rail, but he too suffered an electric shock and fell face down into the pool.

A hospital staffer at Vachira Phuket Hospital in Phuket Town this afternoon confirmed to the Gazette that Mr Surasak is conscious and talking.

“He was admitted at 10pm last night. He hurt his back, but other than that he is on antibiotics as a precaution in case he develops a lung infection from ingesting the pool water,” she said.

Although Mr Surasak seems to be recovering well, doctors had yet to determine when Mr Surasak may be discharged from hospital care, she added.

Mr Ydmark explained that the resort opened on December 7.

“Today we appointed an electrical safety consultant to fully inspect the hotel. Our premises are now safe, including the footbridge,” he said.

However, the electrical experts will tomorrow begin a full-scale inspection of the entire resort’s power system “to make sure there is nothing brewing in the future,” said Mr Ydmark.

“We are working very hard right now to ensure that everything is 100% safe for the guests staying at the hotel, and that is the most important thing right now,” he said.

“I believe their consulate is now helping them in handling their situation,” he added.

Mr Samsonov arrived in Phuket on holiday with his family on February 12.

The Dewa brand of hotels has gained a reputation for delivering quality resorts within the hospitality industry, with the Dewa Phuket, a boutique resort at Nai Yang beach, receiving no less than seven awards at the 2011–2013 Hospitality Asia Platinum Awards (HAPA).