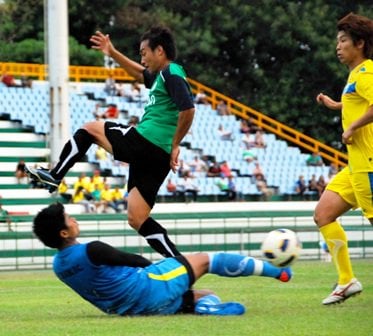 In essence a derby game, it was the Southern Sea Kirin’s fourth of the 2012 pre-season schedule so far.

Proceeds of the ticket sales will be used to help return former Phuket player Camara Ahmed back home to the Ivory Coast.

Camara almost died on the pitch during a game against Chainat FC in 2010 and has been bed-ridden ever since.

Clearly prepared for the contest, the Krabi FC “Andaman Eagles” drew first blood on 36 minutes. Not only did Phuket fans endure the opposition’s jubilation, but also the realization that the scorer for Krabi, one Carlo Coppari, had had trials for Phuket earlier this year.

Having overlooked Coppari it was Krabi that signed the Italian who has played for at least two teams in the Italian Series B league including AC Mantova and Mezzocorona.

Krabi’s signing of Coppari is the second time in two weeks that Phuket fans were forced to swallow the loss of a potential Phuket star to southern rivals – the first time coming last week when Songkhla FC announced the signing of French goalkeeper Jonathan Matijas.

After Coppari’s goal, there were several commendable attempts by both sides, but the first half ended with the Eagles holding a 1-0 lead.

Krabi increased their advantage in the second-half when Satit Sri-uthai scored in the 71st minute to put his side up 2-0.

As the clock wound down, it looked as if FC Phuket would leave scoreless, but new Korean signing, Byeon Seong Won, managed to claim a consolation goal in the final minute of normal time to soothe the crowd.

The Korean’s score was the last action of the evening, however, and the freshly-promoted Andaman Eagles headed back to Krabi elated with their triumph.

Speaking to the Phuket Gazette after the match, Serbian Coach Milos Josic said: “Our players played very badly, and did not pass the ball well. They tried to play the long ball, and I don’t like that [style].

“I must train them more to work on their passing, running and support,” he said.

“It’s not that bad because we have trained for only two weeks. In the next few weeks leading up to the first match of the season, I will train them with more tactics and hope they will play much better,” said Josic.

The evening ended with an announcement that a total of 57,000 baht was raised for Camara Ahmed.

Tickets were sold for 100 baht each.

Speaking at a training session earlier this week, FC Phuket president Narubas ‘Ko Lek’ Aryupong told the Phuket Gazette: “All income for this match will be saved as expenses to send Camara home.

“He is now sick and staying at Vachira Phuket hospital two weeks already. Once he recovers, we will send him back to the Ivory Coast. The travel expenses should be up to a million baht,” said Ko Lek.