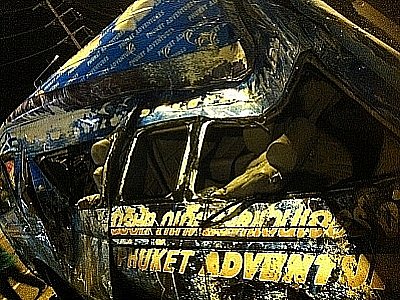 PHUKET: A 10-wheeled truck bound for Bangkok caused misery for Phuket commuters last night when it crashed into a tour van at the Heroines’ Monument in Thalang.

Thalang Police were notified of the crash at 6:40pm.

At the scene they found the truck on its side, pinning a crumpled van, operated by the Phuket Adventures tour company, against a traffic barrier.

Fortunately there were no passengers in the van and both drivers escaped injury.

Much of the load fell onto the pavement when the truck crashed onto its side.

The driver said he was unprepared for the barriers set up to divert traffic flow during rush hour. Unable to brake in time, he slammed into the van, which was heading south on Thepkrasattri Road.

The driver of the truck was charged with negligent driving.

The accident caused long tailbacks at the busy roundabout, home to statues of Thao Thepkrasattri and Thao Srisoonthorn, Phuket’s beloved heroines who are popularly believed to have led the successful resistance to a marauding army of Burmese in 1785.