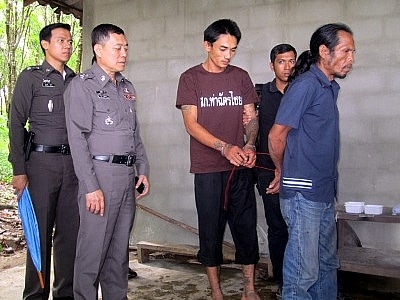 PHUKET: Police have arrested two men for their part in the murders of a man and a woman whose bodies were dumped over a beachfront cliff in Nai Thon before dawn on Tuesday morning.

Sittipong Chareonrak and Ammarin Pantip were presented to the media today at a press conference at Tah Chat Chai Checkpoint.

Sanit identified Sittipong and Ammarin and six other people involved in the killings by viewing a police book of known offenders, he said.

Sittipong stands accused of two counts of murder while Ammarin has been arrested for driving the bodies to where they were dumped.

The two men have confessed to their role in the killings, said Phuket Provincial Police Commander Pekad Tantipong.

Meanwhile police have launched a manhunt for six other persons involved, he added.

Gen Pekad said Sanit told police that on Monday night he drove from Krabi with his wife Urai Limsakul and his friend Somporn “Lek” Kumgert.

The three travelled hundreds of kilometers to meet Pairin “Joom” Yaemtim at a bungalow in Sakoo. With Joom were Sittipong and Ammarin, now arrested, and another man, Nattawut Yaming, the police commander said.

All seven then moved to a shack in a rubber plantation in Thalang around midnight on Monday, explained Gen Pekad.

At the shack, the party of seven were joined by four more men: Joom’s husband So-lae Wongsa-ard, another man named Kittisak Wongsa-ard (relationship with So-lae not established) as well as Apirat Koomban and a man named by police only as “Mard”.

While talking in the shack, members of the group were taking ya bah (methamphetamine), said Gen Pekad.

Then a fight broke out between Mr So-lae and Mr Lek about their “drug dealing business”, he said.

“They could not make a deal, so So-lae ordered his men to kill Mr Sanit, Mrs Urai and Mr Lek,” said Gen Pekad.

“The three victims were tied up and blindfolded, then beaten. Mrs Urai and Mr Lek were unconscious, while Mr Sanit pretended to be dead.

“The men moved the three victims to the back of the pickup truck, then shot dead two of them, Mrs Urai and Mr Lek,” said the commander.

Gen Pekad did not elaborate on whether any attempt was made to shoot Mr Sanit.

“The men drove to a cliff near Nai Thon Beach and threw the victims over the edge,” he said.

Sittipong and Ammarin today conducted a re-enactment of the crime after the press conference.

Police are continuing their investigation and searching for the six others involved in the murders, Gen Pekad said.