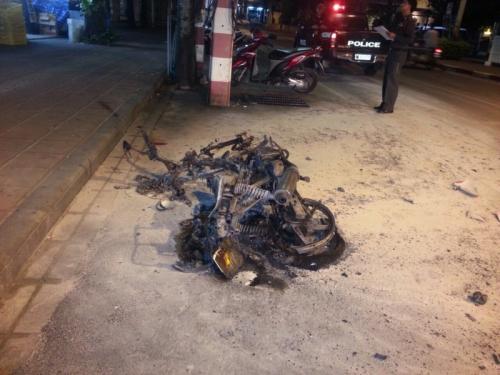 A fourth member of the gang is still being sought by police.

The suspects, Vechayun Boonsit, 19, as well as a 16-year-old minor and a 18-year-old, whose names police asked to be withheld, allegedly attacked a Burmese man and threatened him at knifepoint in Kata around 3:40am on Sunday.

“Officers rushed to the scene and found a Honda Wave that had been destroyed by fire,” Karon Police Superintendent Weerawat Jantarawichit said.

At the scene, the Burmese man, Mr Too, told police that four teenagers on two motorbikes started harassing him, then attacked him and threatened him with a knife.

“The four of them started kicking me and my motorbike and then they threatened me with a knife. I ran away. When I looked back, I saw my motorbike was on fire. I called a friend to pick me up so we could tell the police,” Mr Too said.

The suspects, all from Karon, were identified through CCTV footage recorded by security cameras, Col Weerawat said.

The suspects have been charged with arson, gang attack and carrying a knife in a public area, but they have all denied the charges, he confirmed.

“We will continue to question Mr Too and the three teens about the incident,” Col Weerawat said.