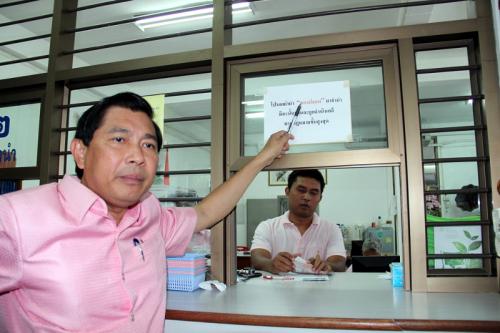 PHUKET: As the new school year started in Phuket yesterday, parents turned to the Phuket City Municipality Pawnshop to cash in items to pay for their children’s school supplies.

Trade was brisk at the government pawnshop, up 20 per cent on last year, said staff.

The occasion brought Phuket Governor Maitri Inthusut and local officials to the pawnshop on Komarapat Road in Phuket Town and to a school uniform shop in Saphan Hin.

“About 99 per cent of the pawned items are gold accessories,” Gov Maitri said, noting that pawnshop staff had to check items carefully to make sure they were genuine.

Other popularly pawned items are electronic equipment and hand tools, he said.

Because of the high demand, the pawnshop has extra cash on hand and has requested even more from the Governor.

The Phuket City Municipality Pawnshop is one of three government-run pawn shops operating on the island in accordance with a national government policy to curb loan sharking and other unauthorized money-lending practices (story here).

Parents must ante up almost 5,000 baht to start the school year, not including transportation costs.

There is no tuition fee at local government schools, but parents must pay the schools 2,850* per year for a variety of fees, including a batik shirt to be worn on Thursdays, sport uniform, school bag, insurance against accidents and loss of property, lunch, parents’ club and document fees, said Kittisak Mitrarat, a teacher at Baan Samkong School.

In addition, parents need to buy the regular school uniform, which goes for 1,000 baht a set before monogramming at the Sincharoen school uniform shop in Saphan Hin.

At the student uniform shop in Saphan Hin, Governor Maitri noted the recent hike in prices for school necessities.

“In the past two months, prices of student uniforms, shoes and stationery have gone up about 10 to 15 baht per item compared with prices this time last year,” he said.

*The original report erroneously included a charge of 1,400 baht for books and lunch, but this amount is included in the 2,850 baht paid to schools.