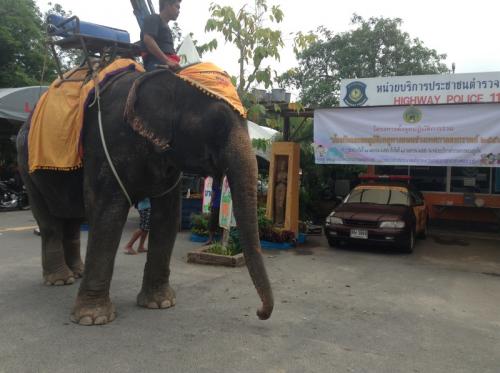 PHUKET: The nationwide Seven Days of Danger road-safety campaign for the Songkran holidays came into effect in Phuket at midnight last night.

As of 5:30pm today, Phuket had yet to record its first fatality for the period, which is notorious for the number of deaths and injuries on Thailand’s roads as millions of people make the journey home to celebrate Thai new year.

Highway Police have set up rest stops across the island where motorists can refresh before continuing their journey, Phuket Provincial Police Commander Choti Chavalviwat announced at the Highway Police stop on Thepkasattri Road at Muang Mai, Thalang.

“At the rest stops, motorists can enjoy free drinks, massages, have their vehicles given safety checks and even sleep in rooms set aside for over-tired drivers during the period, from April 11-17,” he said.

Further south at the Heroines Monument, 50 officers from the Phuket Probation Office and Territorial Defense Volunteers today handed out brochures and stickers to promote safe driving and campaign against drunk driving.

Maj Monnaporn Likitmanon of the Highway Police warned drivers not to drink and drive.

“If we see people drinking and driving, we will arrest them and press serious charges,” he stated.

“Please drive carefully and be considerate of other road users to help reduce the risk of being involved in an accident during your holiday trip,” Maj Monnaporn added.