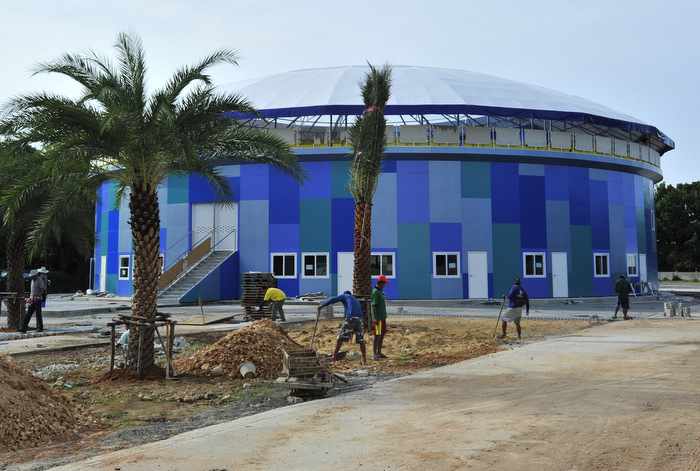 PHUKET: Students from the Prince of Songkla University Phuket campus yesterday handed Governor Maitri Inthusut a petition with more than 400 signatures to protest the nearly-complete Nemo dolphinarium in Chalong.

“We have heard about the dolphinarium set to open on Soi Palai. We do not think that it is a good idea to keep dolphins in a park,” said Latifa Tengting, who submitted the petition on behalf of her fellow students.

“We would like to ask Governor Maitri to stand against the dolphinarium, as it could greatly affect the image of Phuket. Our island could be associated with the act of hunting and importing wild dolphins for commercial use.”

Ms Latifa said that there were better places to see dolphins, such as in their natural habitat (video here).

“You can go see dolphins in the wild in Nakhon Sri Thammarat, Chon Buri and Phetchaburi,” she said.

Many visitors to Phuket also have the chance to see a local school of dolphins that are frequently spotted between Phuket and Koh Racha Yai, which lies just 25km south of Phuket.

Governor Maitri accepted the complaint and praised the students’ concern.

“I am happy to see that Phuket students have a vested interest in our natural resources and a true concern about the welfare of dolphins,” he said.

“The decision to approve the park is beyond my authority, but I have handed the complaint over to the Phuket Fisheries Office.”

The Phuket Fisheries Office operates under the Fishery Management Bureau, which is the office in Bangkok that has the power to approve or deny the Nemo dolphinarium.