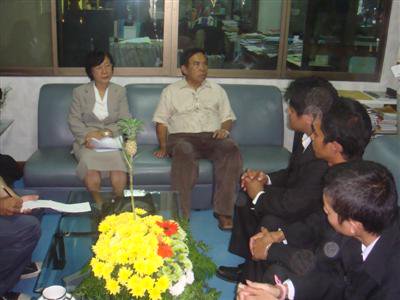 PHUKET CITY: Following protests by students, the director of Phuket Rajabhat University has canceled a controversial red shirt fund-raiser that was scheduled to take place at the university yesterday.

“It appears we will have to cancel this and all other political meetings from both red and yellow shirt parties in future,” Dr Prapa said.

The students were angered that the university was staging a political event that appeared to be giving a stage to the anti-government United Front for Democracy against Dictatorship, or UDD.

Chanon Sarawas, chairman of the school’s students’ association, said “Rajabhat belongs to HM the King. We are angered that our University is being used as a political platform for the red-shirts.”

The university has hosted political events in the past without incident.

There was no student outcry when events staged by the yellow-shirted People’s Alliance for Democracy (PAD) were held there in the past.

Governor Wichai Phraisa-ngop earlier defended the UDD members right to hold the fund-raiser at the school.

Thailand is a democracy and the right to peacefully express political views should be upheld, he said.

Phuket is not it for Michael Jackson fans