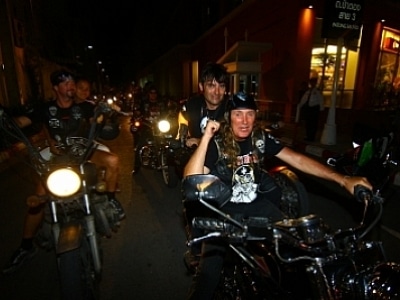 PHUKET: Organizers of Phuket Bike Week 2011 believe this year’s event could attract a record 6,000 big bikes to the island, and along with the annual Songkran Festival, inject at least 600 million baht into the economy.

Last year’s event was a smaller affair than usual, after the red-shirt protests in Bangkok led so many visitors to stay away. With the current lull in Thailand’s turbulent political climate, organizers expect bikers to return in droves.

The event, now in its 17th year, will take place in its traditional slot of April 8 to 10, just before the Songkran festival kicks off.

The festival is being organized by Phuket Province, Patong Municipality, the Phuket Big Bike Club, the Phuket Riders Club, and Ride Thailand magazine. It will once again aim to attract big-bike lovers from across Thailand and the world.

As well as celebrating biker culture, the event will campaign for safe riding during the Songkran Festival, when road casualties tend to increase.

Wittaya Singkalah, the event organizer, said bikers from more than 500 clubs would attend from 26 different countries.

The event is expected to see more than 6,000 bikes and 10,000 visitors coming to Phuket to enjoy the festival.

This year’s attractions will include a big-bike exhibition on the Patong football field, a big-bike tour of Phuket, and stage performances at Loma Park by famous artists including Carabao, Bao Wee, Pe Hi-Rock, Hin Lek Fai, Jiab Pisut and Lam Morrison. There will also be international performers.

Wanaprapha Suksombun, assistant to the director the Phuket Tourism Authority of Thailand Office, said the event would bring a bit of color to Phuket in advance of Songkran.

About 80-90 per cent of Phuket hotel rooms are already booked up over the Songkran period, with tourists expected to put an extra 600mn baht into the economy during that time.