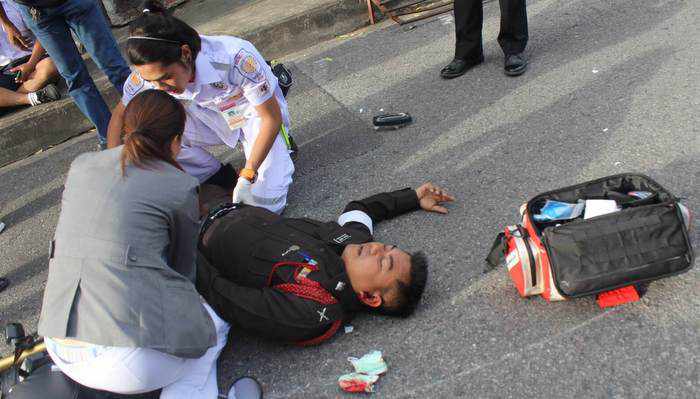 PHUKET: A 17-year-old attempting to avoid a helmet check put a Phuket City Traffic Police officer in hospital after running him over this morning.

The minor, whose name is being withheld, was standing next to him in shock.

“There was blood coming out of Sgt Chakkapong’s ears. His neck and hip were also injured from being hit hard by the speeding motorbike,” Lt Kraisorn Phakaree of the Phuket City Police told the Phuket Gazette.

“Another officer on duty explained that Sgt Chakkapong was directing rush hour traffic when the student came speeding toward him without a helmet on.

“When the student saw the officers calling him over, he accelerated to avoid the helmet check.”

The teen hit Sgt Chakkapong and then continued driving for another 30 meters with him stuck to the motorbike, Lt Kraisorn explained.

“Sgt Chakkapong was taken to Vachira Phuket Hospital. The student was taken to the police station to be questioned with his parents present, as he is underage,” Lt Kraisorn said.

One injured as Phuket taxi slams into pole at high speed