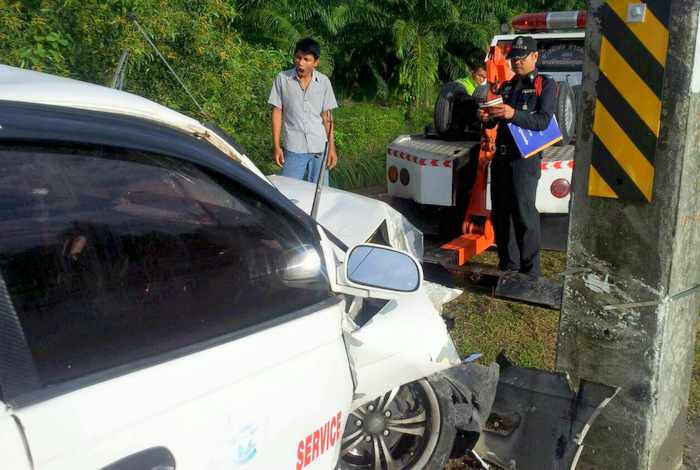 PHUKET: Police have yet to establish the cause of a high-speed accident that saw a Phuket taxi slam into a power pole near the Heroines’ Monument in Thalang early this morning.

Police were called to the scene, near the Tah Reua Shrine, at about 6:50am.

“The driver, Somkid Chantakuapa, 42, had already been rushed to Thalang Hospital,” Lt Col Sanit Nookong of the Thalang Police told the Phuket Gazette.

“He had chest pain and blood was coming out of his nose.”

“He was travelling northbound along Thepkrasattri Road,” Col Sanit said. “Witnesses said that the taxi struck the rear end of a 10-wheeled truck before slamming into the power pole.”

There were no passengers in the taxi when it crashed, Col Sanit added.

“This now looks like a matter for the insurance companies,” he said.

So far, no charges have been pressed.

Phuket location change for free screenings of The Cove documentary