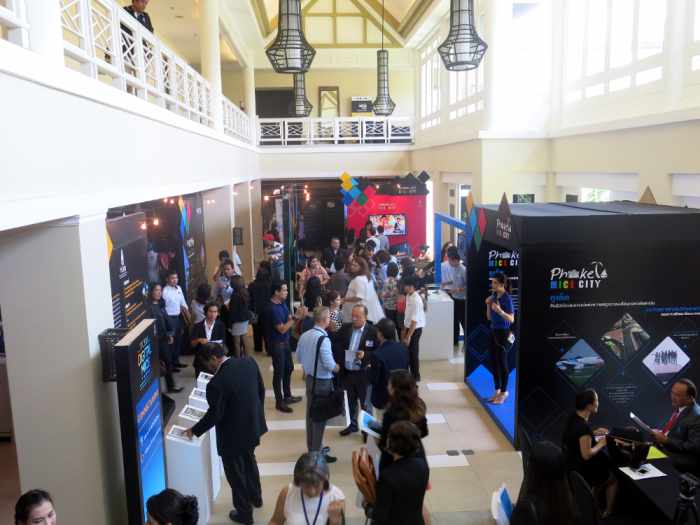 PHUKET: Phuket played host as the final stop on a five city tour of the first annual MICE Mart trade show on Friday.

Organized by the Thailand Convention and Exhibition Bureau (TCEB), the events sought to promote MICE (meetings, incentives, conventions and exhibitions) activities in hotspots throughout the Kingdom.

The tour had already made stops in Bangkok, Chiang Mai, Pattaya and Khon Kaen before the final stop at Laguna Phuket. The organizers hope that the MICE Mart event will play a key role in elevating Phuket to become ASEAN’s leading MICE destination.

“In line with TCEB’s bold 2014-18 Andaman tourism development plan, advancement of MICE in Phuket will be achieved using a three-pillar approach, including the development of infrastructure, the development of tourism and natural conservation, the development of human resources and marketing promotion capabilities. All three pillars will be underpinned by TCEB’s three key strategies: win, promote and develop,” said TCEB President Nopparat Maythaveekulchai.

At the heart of the plan is the creation of a “cluster destination” strategy which will focus on the luxury incentives market which will encompass Phuket, Krabi, Phang Nga, Ranong and Trang.

Mr Nopparat estimated that about 90 per cent of those attending Phuket’s MICE Mart event were from the hotel industry, while the remainder were from entertainment venues.

The TCEB has teamed up with Phuket Rajabhat University in the implementation of a development strategy to establish a provincial MICE database.

The TCEB has announced that they predict a 2 per cent growth of the domestic MICE market in 2014, the number of MICE travellers to reach 4.5 million and revenue to rise 4 per cent to over 14 billion baht.

“We feel good about Phuket’s desire to be the leading MICE city. Most importantly, Phuket has many beautiful beaches, nice hotels, a lot of businesses and many tourists,” said the chairperson of the Thai Exhibition Association’s Marketing and Public Relations Committee Tassapan Isarasakdi Na Ayudhaya.

“Every international conference must be held in Bangkok. We want to change the venue but other provinces don’t have conference halls. If Phuket had one, I think Phuket would be the best MICE city in Thailand.”