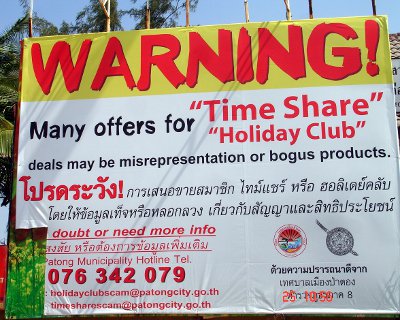 PHUKET: A multi-agency task force will be set up to investigate timeshare companies operating in Phuket, especially Patong.

Tasked with investigating the companies, their workers and any officials involved in allowing the timeshare companies to operate, the “committee” is expected to launch an investigation by October, just before the annual tourism high season begins, Vice Governor Somkiet Sangkaosutthirak announced.

“It’s a big problem. Tourists book holidays with timeshare companies, but when they arrive in Patong, the companies don’t have any hotel rooms for them to stay in. That is destroying our tourism reputation,” said V/Gov Somkiet.

“There are genuine timeshare companies that are registered and have their own offices, such as the operation run at the JW Marriott [Resort & Spa in Mai Khao].

“But there are also people who rent hotels and properties for only a couple of years, but then offer clients use of the properties over 10 to 30 years. That’s cheating,” Mr Chairat said.

“Third are companies that don’t have anything at all, but they tell their clients that they have got everything for them,” he added.

“Many of these operators set up companies and ‘sell’ anything they can, making anywhere from 100 to 500 million baht. They then close their companies and run away.

“Later they open a new timeshare company, because it is easy to open such companies in Thailand, and cheat people all over again. It is damaging our tourism,” he added.

Deputy Mayor Chairat called on other government departments to help clamp down on illegal operators.

“Before issuing any work permits for such companies, the Department of Employment needs to look in detail at such operators, such as checking whether they have their own properties and offices,” he said.

Supporting Patong Mayor Pian Keesin’s call for the committee to also investigate officials, V/Gov Somkiet warned that any officials found to be involved in any illegal timeshare operations will be reported to their office chief.

“About 30 Thai people filed complaints at the Damrongtham Center. They said a well-known company in Thalang had cheated them of about 80,000 to 100,000 baht each.

“When they got to the hotels where they had paid to stay, there were no rooms for them,” he said.

The meeting on Tuesday was called after Patong business owners filed complaints to the Damrongtham Center.

The complaints alleged that more than 100 foreign workers were on the streets of Patong selling timeshare without work permits.

The complaints, filed with details and photographs, explained that timeshare workers continually rode motorbikes around Patong looking for potential “customers” and they stopped mid-traffic to pitch their sales.