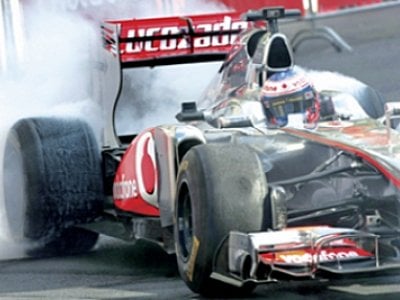 PHUKET: The three week gap between grand prix events is to accommodate FIA approved testing of upgrades at Mugello, near Florence. It is also time the “rumor and disinformation mills” upgrade.

Mugello is not an F1 circuit, and according to hearsay teams are ambivalent about testing on an unknown track. McLaren scheduled test drivers only, although Lewis Hamilton suggested he might go.

Jenson Button claimed McLaren has nothing big to test anyway, while Red Bull’s Vettel said each tiny change is critical to them. The word is that tiny tweaks to his rear-end gave Vettel the Bahrain race.

The technical battleground has for decades been about aerodynamic down-force, which pushes the car down onto the track at different speeds. Red Bull has often looked brilliant with its straight line speed, but less stable at lower speeds. Down-force is provided by wings at the front and rear of the vehicle, and by the ground effect of low pressure air under the flat car bottom. Cars sport numerous “barge boards” and turning vanes that closely control the flow of the air over, under, and around the car.

Red Bull did so well last year because they mastered air flow technologies that have been specifically outlawed this season, supposedly upsetting Red Bull. The whole car, including engine, fluids and driver, must weigh at least 640 kg. The cars are typically lighter, and ballast placed at the bottom of the chassis lowers the center of gravity. It is said that Formula One cars create enough down-force to drive on the ceiling.

Pirelli took charge of tyres in 2011 and pursued a new aggressive strategy.
Tyres now degrade quickly and leave “marbles” which provide a skiddy surface off the racing line. This degradation has been credited with providing a magnificent racing season.

After Bahrain, Schumacher of Mercedes grumbled that tyres now play too important a role, preventing drivers from competing at normal race speeds. On the other hand, engineers generally learn how to manage any constraints within a season, and it has brought strategy to the fore.

Each driver is allowed one gearbox for four consecutive events. An unscheduled gearbox change costs a driver five grid places unless he failed to finish the previous race for reasons beyond the team’s control. The gossip is that Bruno Senna of Williams and Button of McLaren were both retired by their teams in Bahrain with “gamesmanship gearbox problems” to allow a penalty-free gearbox change in the next race.

The buzz is that Williams discovered a gearbox manufacturing fault and had no spare-parts, and according to tittle-tattle McLaren needed to change Button’s gearbox, but did not want him to lose five places as Hamilton did in Shanghai.

F1 as we know it is largely the creation and property of Bernie Ecclestone. Now the biggest rumor is that F1 will IPO in Singapore. Peter Brabeck, the Chairman of Nestlé, is touted as Bernie’s post IPO successor. Brabeck believes that a company should not simply focus on its core competencies. The chit-chat is of a big change in merchandising and target audience for F1.
–

“Gold Den’ bandit back in Phuket for re-enactment