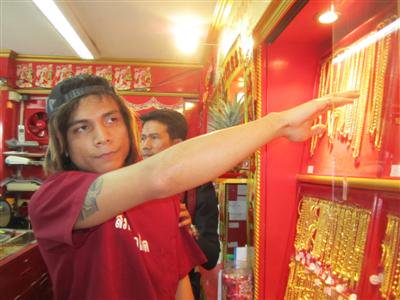 The suspect, Krittasak “Den” Heetkaew, was arrested at his Bangkok apartment

on Thursday and confessed to the Phuket heist and several others using the same modus operandi.

Den immediately gave the owners of the family-run business an apologetic wai upon entering the shop, which he cleared of 6-million-baht in gold ornaments 11 months earlier.

Recovery of the remainder was now in the hands of the criminal justice system, Ms Chantana said.

The shop awarded the investigators who tracked down and arrested “Gold Den” 100,000 baht soon after his capture.

Col Chote told the Gazette, “He confessed he did all the robberies alone. He sold the gold, spending the money on personal items. As we could not recover [most of] the stolen gold, we could only give what remained back to the gold shop owner.”

After the re-enactment, Mr Krittasak was transferred to a cell at Phuket Court to await his arraignment hearing.