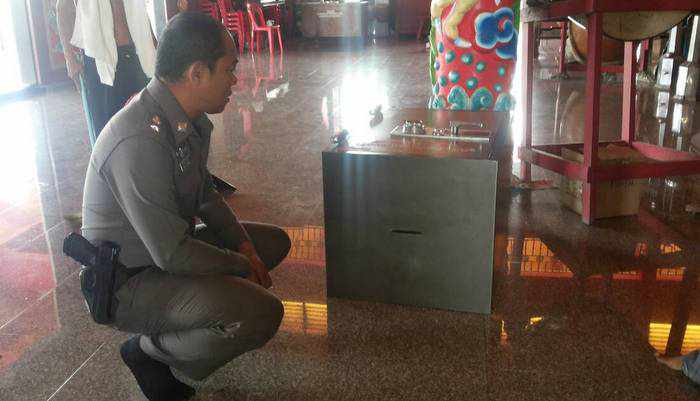 PHUKET: Police are trying to track down the culprits involved in a break-in and possible robbery at the Tah Rua Shrine on Thepkrasattri Road in Srisoonthorn.

“Cheng Kittipisarn, 73, who looks after the shrine, reported the break-in just after 8am today,” Lt Col Sanit Nookong of the Thalang Police told the Phuket Gazette.

Mr Cheng was waiting near an overturned donation box when police arrived.

“When I arrived at my usual time this morning, I saw that one of the doors was open. Then I walked inside and saw the donation box lying on the floor on its side,” said Mr Cheng.

“I think someone broke in and tried to take money from the box, but they could not open it. It also looks like they may have tried to stick something in the slot to pull the money out.”

In August of last year, a destitute Italian expat named Franco Minichelli was caught using a stick with gum attached to the end to pull money out of a temple donation box in Karon (story here).

Donation boxes, made of steel, are opened only once a year, at the beginning of the Vegetarian Festival, explained Mr Cheng. No one can know exactly how much was inside the Tah Rua donation box or if any money was stolen from it.

There is also no CCTV installed in the shrine, noted Col Sanit.

“We believe that the suspects climbed in through a window and broke out through the door when they left, but there is no CCTV inside the shrine, so it is hard for us to know who they are,” he said.

“However, officers have started an investigation into potential suspects.”

Col Sanit added that he planned to talk to the shrine committee about installing CCTV.

“We thought the doors were strong enough,” said Mr Cheng. “We never expected someone to break in.”

Police arrest suspect over slaying of Canadian in Patong