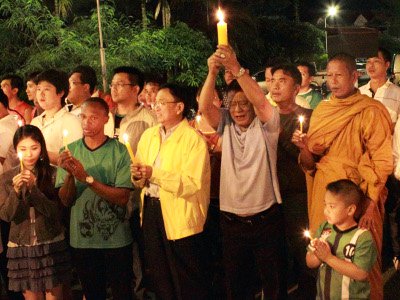 Mr Ahmed, from the Ivory Coast, remains comatose in the intensive care unit after collapsing from a heart attack on the field at Surakul Stadium last Saturday.

Mr Ahmed’s brother, Kone Lassine, 37, arrived from his home in Chonburi for the vigil.

Joined by FC Phuket players, club president Paiboon Upatising and about 100 fans, Mr Lassine and his fiancee folded paper into bird shapes in front of Mr Ahmed’s hospital room as a sign of good health.

The crowd then gathered in front of the building to light candles and pray for Mr Ahmed.

“I am supposed to go back to Ivory Coast to see my mom before she joins the haj to Mecca, but I have to be here instead,” said Mr Lassine.

“I know that Thai people have good hearts, but it is still very surprising to see such goodwill and sincere support like this. It is unbelievable to see how good FC Phuket and their fans take care of my brother,” he added.

“I now know I am not alone. I want to say thank you very much to FC Phuket management, the team and fans for caring for Camara as if he were a part of your family,” he said.

In sporting spirit, Mr Lassine urged FC Phuket to continue their fight for promotion to Division 1 when they travel to the capital to take on Bangkok FC this weekend.

“This time, Camara cannot go with you but he will be in your heart. Please just win this match for him. He will be more happy to wake up and hear that FC Phuket is champion and can go to Division 1,” he said.