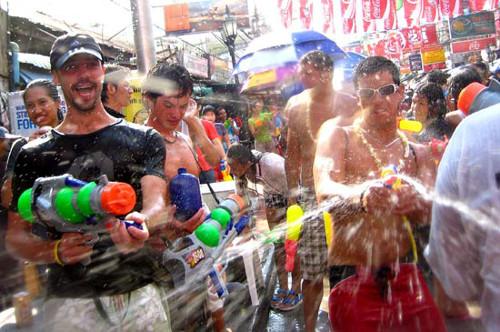 PHUKET: Police checkpoints and water-play zones will be set up to increase safety on Phuket during the Seven Days of Danger for Songkran, April 11 to April 17.

“Police checkpoints will be set up around the clock during the period in order to check on drivers,” says San Jantharawong, chief of the Phuket office of the Department of Disaster Prevention and Mitigation (DDPM). -Phuket chief told the Phuket Gazette.

Mr San told the Phuket Gazette that the safety measures were discussed at a meeting at Phuket Provincial Hall earlier this week.

“At the meeting, we also agreed that we need to set up water-play zones to improve road safety,” he said.

“Police in each station will identify water-play zones. On April 3, we will have another meeting to clarify where these areas are going to be,” he added.

“This year the Seven Days of Danger for Songkran are from April 11 to April 17, the same days as last year,” Mr San said.

“We hope the number of deaths, injuries and accidents will be lower this year,” he said.

In 2012, drunk driving was the cause of 39.2 per cent of all road accidents in Thailand during the Songkran period, according to Yongyuth Wichaidit, Deputy Prime Minister of the National Road Safety Center (story here).

In Phuket, 43.1 per cent of the accidents during Songkran 2012 were attributed to drunk driving.