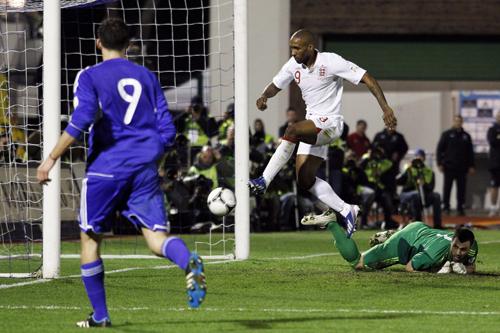 PHUKET: World champions Spain were held by lowly Finland but there were wins for England, Germany, France and Netherlands as Europe’s top teams returned to the task of qualifying for next year’s World Cup finals yesterday.

The first of this month’s two rounds of qualifiers – with another 20-plus matches scheduled for Tuesday – went according to plan for the big guns apart from Spain who lost top spot in Group I to France after Finland forced a 1-1 draw in Gijon.

England scored their biggest victory for 26 years when they triumphed 8-0 in San Marino, Germany won 3-0 in Kazakhstan, France beat Georgia 3-1 in Paris and Netherlands scored three second-half goals to beat Estonia 3-0 in Amsterdam.

The rapidly maturing Belgium team took another step towards next year’s finals in Brazil when they won 2-0 – albeit with a nervy performance in Macedonia – to stay top of Group A, level on points with Croatia who won a passionately intense derby against bitter Balkan rivals Serbia 2-0 in Zagreb.

There was also an important win for another former part of the old Yugoslavia with Bosnia beating Greece 3-1 in Zenica to move three points ahead of the Greeks at the top of Group G.

Other teams with their eyes on Rio who stumbled included Portugal, who trailed 3-1 in Israel before recovering for a 3-3 draw and Sweden, who lost ground on Group C leaders Germany when they were held to a 0-0 draw by Ireland in Stockholm.

The biggest surprise, though, came in Gijon where Teemu Pukki scored 11 minutes from time to give Finland their second point in the group and help knock Spain off top spot.

Pukki fired past Victor Valdes on a rare counter-attack after they had withstood waves of pressure from the hosts.

Spain’s Sergio Ramos, winning his 100th cap, broke the deadlock with a header from a corner just after halftime but Vicente del Bosque’s side struggled to make their dominance count.

The draw leaves world and European champions Spain under pressure to get a victory next Tuesday when they visit their closest rivals France, who were too strong for Georgia in Paris.

Olivier Giroud, Mathieu Valbuena and Franck Ribery scored for France who lead the group on 10 points, two more than Spain.

England were the highest scorers on the night, showing San Marino no mercy in a demolition in Serravalle for their biggest win since a victory by the same score over Turkey in 1987.

The hosts were spared a double-figure defeat but did nothing to counter the argument they should enter a pre-qualifying tournament – managing only one half-hearted attempt at goal.

England face a sterner test on Tuesday against Group H pacesetters Montenegro, who still lead Roy Hodgson’s side by two points after beating Moldova 1-0 away despite having Milorad Pekovic sent off just past the hour mark.

Mirko Vucinic scored 12 minutes from time to keep Montenegro on course for a first appearance at the World Cup finals.

The match was played under tight security amid fears of crowd trouble but apart from sporadic abuse from home supporters towards Serbia’s players, it was incident-free after both federations agreed not to take away fans to either fixture.

The sides, meeting for the first time as independent countries after the violent break-up of the former Yugoslavia in the 1990s, meet each other again in Belgrade on September 6.

Germany, playing without a recognised striker for the first time in a competitive match under coach Joachim Loew, eased past lowly Group C rivals Kazakhstan in Astana.

Two goals in three minutes midway through the first half from midfielders Bastian Schweinsteiger and Mario Goetze, put the Germans in control before Thomas Mueller made it 3-0 16 minutes from time.

Germany have 13 points from five games ahead of Sweden on eight from four following their goalless draw with Ireland.

Netherlands maintained one of only two 100 percent records left in the European qualifiers with a 3-0 Group D win over Estonia as Rafael van der Vaart, Robin van Persie and Ruben Schaken all found the net after the break.

The Dutch have taken a maximum 15 points from their five games and are well clear of Hungary and Romania who drew 2-2 in a match played behind closed doors in Budapest as punishment for racist chanting by the home side’s fans in a previous game.

Russia, who have the other perfect record after four games, were due to play Northern Ireland last night but the match was postponed until today because of heavy snowfall in Belfast.

The nine group winners in Europe qualify directly for the 2014 World Cup in Brazil. The eight best runners up go into a playoff round with the four victors taking the remaining spots.

Wales shrugged off the halftime loss of playmaker Gareth Bale to storm back from a goal down and beat bottom side Scotland 2-1 in a World Cup Group A qualifier played in the Hampden Park snow in Glasgow.

Scotland, in their first competitive match under new coach Gordon Strachan, took the lead just before halftime when defender Grant Hanley knocked in a corner from Charlie Mulgrew.

Robert Snodgrass went close to making it 2-0 when his curling left-foot shot from the edge of the penalty box struck the post in the 54th minute.

Wales had a goal by substitute Andy King chalked off for a foul on keeper Allan McGregor before Aaron Ramsey levelled with a ferocious 72nd-minute penalty that went in off the underside of the bar.

The spot kick was awarded after Snodgrass was sent off for a reckless challenge on Chris Gunter on the edge of the area.

Ramsey’s night was spoiled when he was dismissed in stoppage time for a professional foul.

Tottenham Hotspur forward Bale, who had been an injury doubt before the match, was replaced at the interval by debutant Jonathan Williams.

The victory lifted Chris Coleman’s Wales side to third in the table with six points from five matches. Scotland are rooted to the bottom on two points