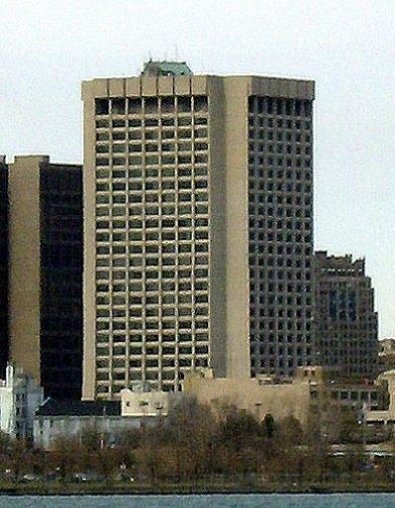 The incident began on February 26, 2011, when an employee with the Federal Bureau of Investigation (FBI) found a black Husky tool bag at the Patrick V. McNamara Federal Building in Detroit. He reported the abandoned bag to Federal Protective Service (FPS) officer Ralph Smith, who seized it and stowed it under a desk.

The bag, which contained a metal rectangular cash box, went unnoticed for three weeks until FPS officer McManus ran the bag through an x-ray machine on March 18 and discovered the cash box appeared to contain wires and other suspicious material. He then called the Detroit Police Department Bomb Squad, which took the bag to Detroit’s Belle Isle Park where the bomb went off as experts were attempting to render it safe.

“Although the IED did not explode, it represented a serious risk to the safety and security of the building and its occupants,” the 37-page report said. It also criticized the training, hiring practices and oversight of security guards at the building, where an FPS inspector failed to identify the suspicious bag during four inspections.

As a result of the mishandling of the suspicious bag, three guards were fired, including the one who brought the bag inside, and a fourth guard resigned before being fired. Five other guards at the building were given suspensions ranging from one to five days, according to the report.

Days after the incident, 42-year-old Gary John Mikulich of Kingsford, Michigan, was arrested on one count of maliciously attempting to damage or destroy, by means of an explosive, any building, vehicle, or other personal or property in whole or in part owned or possessed by the United States government.

Mikulich had a long history of threatening and complaining about the FBI, including an October 1996 incident during which he told Secret Service agents he “felt like” shooting a couple of FBI agents. And in a number of fax messages sent to the Iron Mountain Police Department in early 2011, Mikulich accused the FBI of murdering his father, three specifically named individuals, and “about a thousand people in town here.” He also believed the FBI wanted to kill him.

Mikulich, who repeatedly called himself “President Mikulich” and claimed to be a “nominated president of the United States of America,” remains in custody but has been deemed incompetent to face trial. If he will ever face trial, Mikulich faces up to 20 years in prison and a fine of up to $250,000.