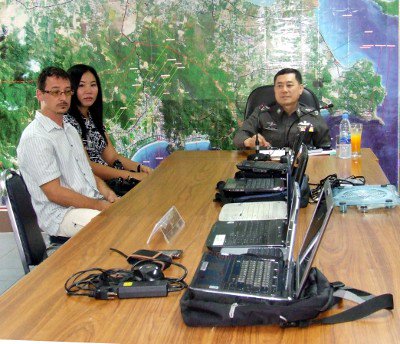 PHUKET: Police today announced the arrest of three teenagers being charged with breaking and entering, and theft from, at least 20 Phuket homes.

The arrests followed Chalong Police officers on patrol in Soi Thanuthep spotting a young boy riding a motorbike that had been reported stolen.

The officers stopped the 14-year-old and asked him to prove who owned the bike, which he failed to do.

The boy later confessed that he stole the motorbike from a house in Moo 6, Rawai about 5pm last Saturday, said Phuket Provincial Police Commander Pekad Tantipong, who led the press conference today.

The boy also confessed to having stolen a black Samsung mobile phone he was carrying, police said.

The boy said that he and two friends stole the phone, among other items, from a house in Soi Saiyuan 14 in Rawai, said Maj Gen Pekad.

The boy lived with the now-arrested 16-year-old in a rented room in Soi Thanuthep, where police seized a pink Canon camera and a Sony MP3 player.

The 14-year-old also admitted that both items were stolen, said Maj Gen Pekad.

Police later arrested the 17-year-old at a house in Moo 2, Rawai, where police seized six notebook computers, all believed to be stolen.

The boys also confessed that their most recent break-in was on Tuesday, when they stole items from the house of Canadian Robert Kief, 43, who also lives in Soi Saiyuan 14, Rawai.

Mr Kief, retired and living in Phuket for two years, and his wife were present at the press conference today.

They told the police they will file for damages to a door and a gate sustained in the break-in.

Mrs Kief, who lectures at Phuket Rajabhat University, also reported that three notebooks, the pink Canon camera and the Samsung mobile phone were all stolen from their house.

During questioning by the press, the 17-year-old explained how the three boys broke into the house.

He said he climbed up to the third floor and entered through a window, then walked downstairs to open the front door for the other two.

He also confessed to having been convicted on drug charges before.

Chalong Police investigation chief Maj Jaran Bangprasert said, “The property they stole from people’s homes had already been sold – it was not easy to track down.”