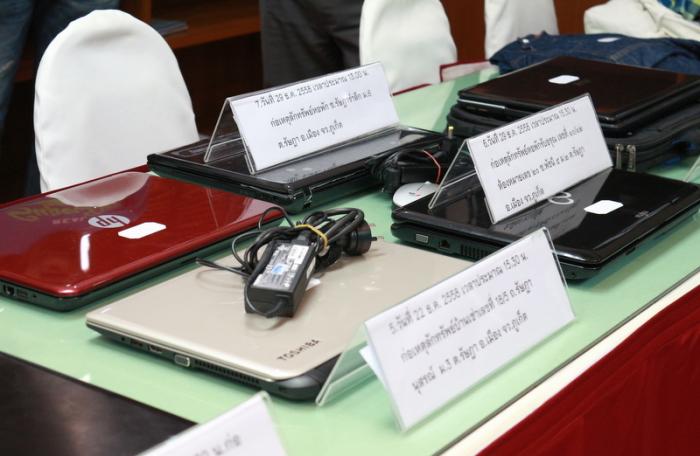 PHUKET: Police arrested a serial thief on Tuesday after footage of his escapades was caught on several of his victims’ personal CCTV cameras in Phuket Town.

Chatchai Klanpakdee, 26, was tracked down to his rental room in Cherng Talay where he was found in possession of eight notebook computers, an electric guitar and clothes worn during the crimes.

“Mr Chatchai has a previous criminal record for theft. He admitted to breaking into about eight different residences throughout December, using a method he was taught by his former cellmate,” said Phuket Provincial Police Commander Teeraphol Thipjaroen.

Mr Chatchai told officers that he was employed as a mechanic after being released from prison, but after losing his job several months ago, he returned to theft.

“Judging by the proceeds from the sale of the stolen goods, we estimate that Mr Chatchai stole more than 300,000 baht’s worth of items,” Maj Gen Teeraphol added.

Mr Chatchai’s method of breaking into homes required only a wrench, as he chose doors that had a single lock on the doorknob.

“We would like to suggest that homeowners install an additional lock to prevent things like this from happening,” Gen Teeraphol said.

Mr Chatchai has been charged with theft.