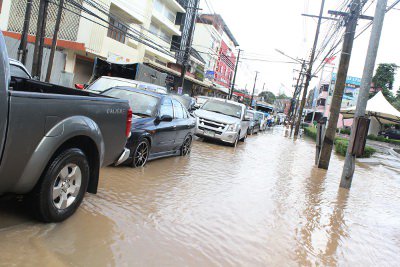 PHUKET: Phuket City Municipality this morning announced that Phuket Wittayalai School and Satree Phuket School, both on the north side of Phuket Town, are closed today after heavy rains last night caused minor flooding across the island.

“Those who could move possessions to the second floor did so,” said one officer.

Power was not cut off to the homes.

“We are monitoring the water level. Water in front of the hospital is about half-a-wheel deep. We have no plan to move patients just yet,” he said.

Officers around the island are clearing the floodwater as quickly as possible.

Phuket City Municipality officers are using pumps to drain water from the streets, while Rassada Municipality has workers clearing debris that is blocking drains.

Rassada Mayor Phudit “Ko Noi” Raksarat told the Gazette, “As much as 40 per cent of Rassada municipal area has been affected by the floods, especially in Soi King Kaew.”

Reports are already coming in of floodwater dissipating and of water levels returning to normal.