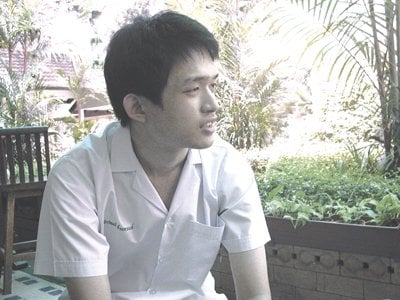 PHUKET: A student from Phuket who was forced to turn to charity to fulfill his dream of becoming a doctor has graduated as one of this year’s top honors graduates from Prince of Songkhla University in Nakhon Pathom.

Thirawat Jewpakanon won first class honors, was named as a top-ten student in a class of 190, led his 30-member intern rankings at Haad Yai Hospital and won the prestigious Gold Medal for being the outstanding student in Geriatric medicine studies.

Jiew – as he is known to friends – is now practicing as a junior doctor at the Vachira Phuket Hospital.

But it could have all been very different. Just over six years ago he had completed his secondary schooling at Phuket Wittayalai School, being top-of-class for the previous three years.

He took the entrance examination for medicine and was offered a university place, but that came with a considerable financial cost.

“It was not that long after the 2004 tsunami and my parents’ business was suffering. They operate a small food vendor stall in Phuket Town,” Jiew, at 24 the second of three brothers, recalled the week as he took a break from work in the neurology ward.

“The expenses associated with studying medicine are high and they simply could not afford it. My elder brother had actually given up his job in a bank to help the family, so I knew they were not in a position to help me.”

He cast his net for support, quickly finding a sponsor in the Phuket International Women’s Club (PIWC), which chose him as its first ever medical undergraduate in a history of supporting students from underprivileged backgrounds.

In its 23-year history since inception, the volunteer-only PIWC has supported more than 750 students in school, college and university studies through its education scholarship program.

Jiew’s scholarship would fund him through the six years of studies ahead, a prospect he said was daunting but that he was determined to overcome.

And, although he thoroughly enjoyed his time in Haad Yai, there was always the magnet of home.

He said: “We were and still are a very close family, so it was difficult to spend most of six years away from them once I was given the support. I enjoyed my time at Haad Yai, but I missed them all the time.

“But, considering the support and backup I was receiving, I knew I owed it to everyone who had faith in me to achieve my academic goal.

“There is still more to go. I am Phuket born and raised [in Chalong], so I want to give something back to my home province and the people who live here. I feel it is a duty.”

Jiew is extraordinarily humble about his achievements, regarding them as reaching the target he needed to set himself.

Dr Boonyarat Warachit, the Chief of Haad Yai Hospital Medical Study Center, said that Jiew had been one of the outstanding students.

“His medical records were so excellent we use them as examples for other students to follow,” he said.

After a year in his current posting Jiew will spend the next two at a local community hospital, either in Patong (Kathu District) or Thalang District. Then it is on to specializing, either in Obstetrics or Geriatric medicine.

Jiew is also tempted to broaden his experience internationally when the ASEAN free-labor market for skilled professionals comes into force in 2015.

“That would be a very exciting experience if I was given the opportunity”, he said. “But I would always come back to practice in Phuket. It’s home.”

PIWC Melbourne Cup this year
The PIWC’s major fund raising event this year will be a Melbourne Cup extravaganza to be held at the Latitude Marquee in Laguna on November 6.

The celebrations will run throughout the day, starting from 9am, and will include fashion shows, sweepstakes, lunch, all forms of liquid refreshments and, of course, watching the big race on even bigger screens.

The Cup, as it is known to Aussies, is recognized as one of the world’s premier horse races. It is also the richest “handicap” race – each horse has to carry a designated weight – and this year offers prize money of more than A$6 million (about 198 million baht). The winner’s trophy alone is worth A$175,000 (almost 5.8 million baht).

The 3,200-meter race was first run in 1861 and is always held on the first Tuesday in November at Flemington Racecourse in Melbourne. In recent times the quest for glory has drawn entrants from around the world, many from Europe.

It is the culmination of a carnival of racing held at the course and is reminiscent of the Cheltenham and Royal Ascot festivals in England.

Australia will simply shut down at 11am on November 6 for the big race. That’s why it’s called “the race that stops a nation”.

More information can be found at www.phuketiwc.com.