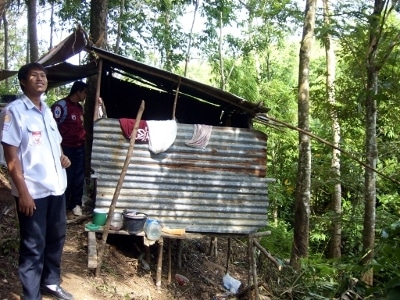 PHUKET: Phuket Police are questioning the girlfriend of a rubber tapper found bludgeoned to death in the hills behind Layan Beach earlier today.

Thalang Police responded to a report of a murder in Cherng Talay Village 6 at 9:20am.

At the scene, inside a small hillside shack, they found the body of a 49-year-old man thus far identified only as “Yod”. The body was in a face-down, kneeling position.

Other rubber tappers in the area told police that Mr Yod and his female companion, identified only as “Lamduan”, were migrant workers who earned a living tapping rubber in the area, the property of a local male landowner named “Daeng”.

Mr Yod liked to drink and often beat his girlfriend when drunk, they said.

Ms Lamduan had earlier gone to Thalang Hospital for treatment of injuries sustained in the latest fight and then reported the incident to Thalang Police, the neighbors said.

Mr Yod suffered two large gashes to his forehead from a bloodied hoe found just outside the entrance to the dwelling.

Kusoldharm Foundation workers used a stretcher to carry the body down the steep hillside to their rescue vehicle. It was then transported to the Thalang Hospital morgue for examination and storage.