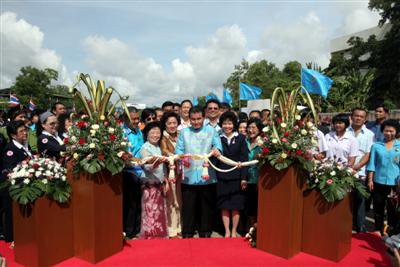 PHUKET CITY: The Phuket Governor and three of Phuket’s top politicians on Thursday traveled to Bangkok to lobby Cabinet to endorse a controversial plan to allow construction of a new road to Saphan Hin through protected mangrove forest.

Phuket Governor Wichai Phraisa-gnop made the trip with Phuket MPs Tossaporn Thepabutr and Rewat Areerob, as well as appointed Senator Phummisak Hongyok, who is also former Mayor of Phuket City.

The quartet tried to convince cabinet to finally allow construction of a new 600-meter road that has been stalled for over a decade.

Gov Wichai said he had ‘good news’ for the many people who support the construction of the new road, but added that final approval has still not been granted.

“What’s the big problem? This project has been stalled for over 10 years, so now I really want to help. It is a good project. The benefits far outweigh the costs. Fortunately, we were able to make our case directly before Cabinet, addressing all of their concerns. Had we not been given this chance, we might not be allowed to move forward…Now we don’t have anything to worry about,” he said.

The governor earlier promised the 600-meter extension would be finished by year’s end ‘as a gift to the people of Phuket’.

That now looks unlikely, however, as Cabinet has called for a more in-depth environmental impact assessment to be conducted before it will give its final approval.

“Hopefully it will be finished within two months,” Gov Wichai said.

A chief concern is how the road will affect drainage in the area, which is nearby Phuket’s only waste incinerator and piles of landfilled garbage growing at a rate of about 250 tonnes a day, on average.

The landfill is surrounded by ponds of highly toxic, black leachate that sit only slightly above the high tide mark of the area, which is built on reclaimed land.

In 2007 one of the pools overflowed into the surrounded mangrove forest, killing millions of farmed fish.