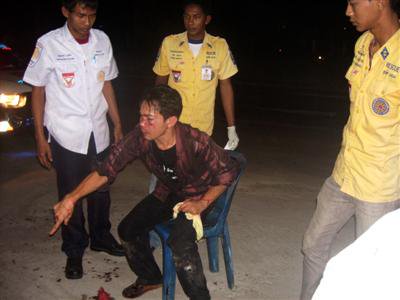 PHUKET: The owners of a mom-and-pop store in Phuket got a rude awakening early this morning when a car crashed through the front of their home.

Thalang Police received a report at 2:45am that a car had crashed into the shopfront of a home on the northbound side of Thepkrasattri Road, opposite the electrical substation in Baan Lipon, Thalang.

Led by Lt Patiwat Yawdkhwan, police and Kusoldharm Foundation rescue workers rushed to the scene, located on the outskirts of the Udomsuk housing estate.

There they found a Honda Civic crashed into a large mom-and-pop store with a curry vending operation at the front.

Still at the scene was the driver, 28-year-old Krabi resident Boonyaan Boonthip, and his passenger Worawit Royroongruang, 26, from Songkhla.

Both men suffered bruising from the impact and Mr Boonyaan was bleeding from a gash under his left eye.

The pair said they were returning from a night out in Phuket Town when the accident happened.

Fortunately, the shop owners sleeping nearby were protected from the car by a cement wall at the back of the shop.

After being awoken by the crash, the shop owners did not mince words in letting the men know what they thought of them.

With strong suspicions that the pair had been drinking, police escorted the two men to Thalang Police Station for questioning.

Lt Patiwat told the Phuket Gazette this afternoon that Mr Boonyaan would initially be charged with reckless driving resulting in damage to a third party.

Whether he will also be charged with drunk driving depends on his blood alcohol test, the results of which are still pending, Lt Patiwat said.