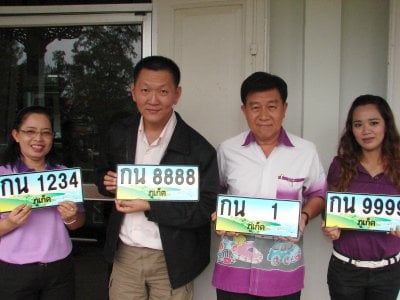 PHUKET: The island’s high-rollers will descend upon The Metropole hotel in Phuket Town on February 26 and 27 for the sixth annual “Lucky” License Plate Auction.

Organized by the Phuket Land Transport Office (PLTO), the event will see 301 license plates go to the highest bidders.

The auction will be held from 8:30am to 4:30pm in the Prapitak Grand Ballroom.

Kanok Siripanichkorn, chief of the PLTO, explained that all plates to go under the hammer are for personal sedan vehicles with a capacity of fewer than seven persons and are designated with the Thai letters “Kor Nor”.

Among the “Super Number” plates up for auction, featuring the color image of Laem Phromthep as the background, are 1111, 8888 and 9999 – all considered especially auspicious by many Thais.

The opening bids for these double pairs are set at 50,000 baht each, said Chief Kanok.

“These plates can be great gifts for your loved ones and family members.” he said.

Opening bids for plates with other appealing numbers range from 500 to 10,000 baht, Chief Kanok added.

Chief Kanok explained that money raised from this month’s auction will be donated to the Road Safety Foundation.

Bidders must register at PLTO before February 25 or on entering the event.