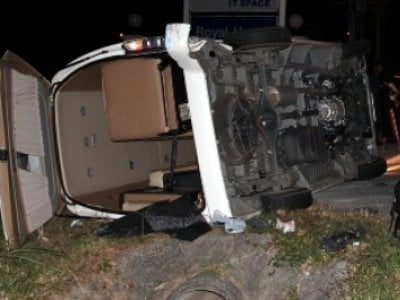 PHUKET: One person died and another was seriously injured in a four-vehicle hit-and-run accident on Patak Road in Karon before dawn today.

Just after midnight, Chalong Police received a report that there was an accident on Patak Road involving one truck, one van full of Chinese tourists and two motorbikes.

Chalong Police Captain Nitikorn Rawang and Phuket Ruamjai Kupai Foundation workers arrived at the scene and found the body of Jaturaporn Chuthanom, 20, and the black Honda Click motorbike he was riding in the southbound lane.

In the northbound lane was the overturned van. Not far away was a red and white Honda Scoopy motorbike in the drainage ditch along with a pair of woman’s shoes. Emergency medical workers were first at the scene and rushed the woman to hospital before police arrived.

According to witnesses, the Scoopy motorbike was followed by a truck, which hit it from behind.

“Then the motorbike hit the oncoming van on the opposite side of the road. That caused the van to brake and lose control. It was in turn hit by the Honda Click motorbike, which had been following the van. The motorbike driver flew off the motorbike and landed in the drainage ditch, where he died” said Capt Nitikorn.

The truck driver, who is thought to have caused the accident, fled the scene in his vehicle.

Police officers are now searching for him.

Chalong Boonnaro, the 40-year-old driver of the van, said he was taking a group of Chinese tourists to the airport at the time of the accident.

“I picked up six Chinese tourists from the Club Med Hotel and was heading towards the Phuket International Airport. The motorbike crashed into the back of my van. I lost control and drove into the other lane of the road, then the van turned over. Luckily none of my passengers were seriously injured,” said Mr Chalong.

The Chinese tourists were still at the accident site when police arrived. They were in shock, but only one of them suffered injury requiring hospital treatment, said police.

The whole group presumably missed their flight. When they do eventually return home they will no doubt add to scores of foreign tourists spreading horror stories about their experiences with the Phuket public transport “system”.