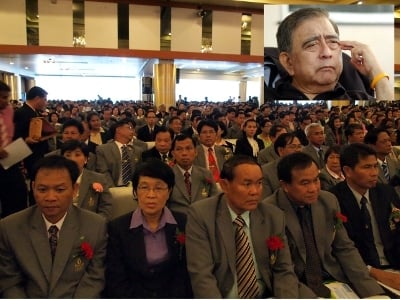 PHUKET: The man whose warnings of a possible tsunami disaster along Thailand’s Andaman coast went unheeded years before the 2004 calamity struck was in Phuket recently, urging a national assembly of school administrators to be prepared for more possible disasters in 2012.

Dr Smith Dharmasaroja, former Director of the National Disaster Warning Center (NDWC), was guest speaker for a gathering of some 2,000 secondary school directors and deputy school directors in the main ballroom at Royal Phuket City Hotel in Phuket Town on Thursday.

Speaking on the likelihood of a possible earthquake and tsunami disaster like the one that befell Thailand and neighboring countries in 2004, he urged the administrators to “be prepared but not to panic”.

“Earthquakes have occurred in many countries lately, and there is always a possibility one could hit Thailand as well. Our warning center has detected some movement from [tectonic] plates in the Indian Ocean and Andaman Sea that indicates an earthquake could happen sometime soon,” said Dr Smith.

Doctor Smith was referring to work by the National Disaster Warning Council Foundation (NDWCF), a non-government organization he set up with other retired bureaucrats after his dismissal as head of the NDWC.

Former Thai premier Thaksin Shinawatra installed Dr Smith as director of the NDWC after its formation in the wake of the 2004 disaster, but his authority was undermined when a subsequent government put the agency under the Meteorological Department.

After he was removed from the agency altogether, he later became a critic of its work in maintaining the tsunami early warning system he helped establish. As a result, he set up the NDWCF as a parallel organization.

“The earthquake could cause a tsunami in southern Thailand, along the Andaman coast, so the warning system should be ready at all times and everyone should always be prepared. If we maintain preparedness, there is no need to panic,” he added.

Although Thailand is not located directly on any of the major tectonic faults that comprise the “ring of fire”, there are many minor faults in Thailand, he explained.

“There are 13 such faults in Thailand. Any major earthquake that occurs in our neighboring countries could affect these faults and can cause a lot of damage,” he said.

He specified a fault zone near the Three-Pagoda Pass in Kanchanaburi province, on the Burmese border, as one of the highest-risk areas. A major tremor there could affect the structural integrity of the Srinagarindra Dam, he said.

“Our capital city Bangkok has a very high risk of suffering serious disasters. Bangkok is located on loose soil and it continues to sink every year. If a magnitude 7 to 8 earthquake were centered nearby, Bangkok could suffer severe damage,” he warned.

“Although 2012 could be a year when many natural disasters occur, I would like everyone to prepare for the worst — but not to panic about the possibility,” he told the educators.