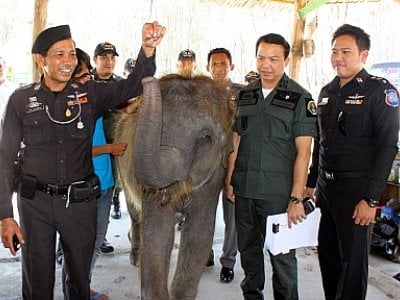 PHUKET: Three elephant camps in Phuket are being investigated after concerns were raised about the origins of the baby elephants in their possession.

Officers of Central Investigation Bureau of the Royal Thai Police in Bangkok investigated Phuthai Souvenir Market in Chalong, ATV Elephant Camp near the Big Buddha image in Karon and Sheraton Camp in Cheng Talay to determine if the baby elephants were born in the wild or not.

“We came down to examine the elephant camps in Phuket as part of our investigation of Sai Yok Elephant Park, where there are 51 elephants. We got search warrants for the camps and found one baby elephant in each of the three camps,” said Col Watcharin Phusit, the superintendent of the regional Natural Resources and Environment Crime Suppression Division.

Tassanes Petkong, an officer with the National Park Department Wildlife and Plant Conservation Center, told the Phuket Gazette, “The mother of the three baby elephants from Sai Yok Elephant Park is also being investigated because they do not have her identification document. So it’s unclear if she was illegally taken from the forest or not.”

“If the mother elephant is working illegally in the tourist trade, so are the baby elephants,” Mr Tassanes added.

DNA from the three baby elephants will be collected and checked against the DNA of the supposed mother in a laboratory in Bangkok. The results will take about two weeks, said Mr Tassanes.

“If the test leads us to believe the elephants were illegally bought, they will be taken to Lampang [where there is a rehabilitation camp for abused elephants],” said Col Watcharin

“Meanwhile anyone found guilty in the case will get up to four years in jail, a 40,000 baht fine, or both in accordance with Wildlife Preservation and Protection Act,” he added.

While the testing is done the baby elephants will stay with their present owners, who are not allowed to move them, said Col Watcharin.

During their investigation of Phuket Snake Show Co Ltd, which is part of Phuthai Souvenir Market, officers found 40 different types of snakes from cobras to blood pythons. Some of the species are protected in Thailand.

The officers are checking on the paperwork for all of the snakes to make sure they are all legally owned.

The raid followed an expose by Dutch wildlife activist Edwin Wiek that originally appeared in Gazette-partner publication The Nation.