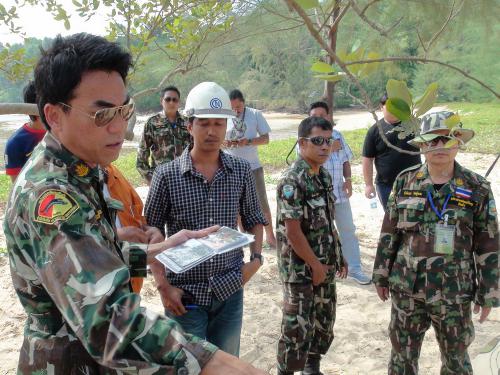 The Mai Khao resort stands accused of clearing swathes of sea morning glory from the beach and planting palm trees as part of a beach beautification project.

Sirinath Marine National Park Chief Cheewapap Cheewatham, who led the raid, was accompanied by officers from the Cherng Talay Police.

“We found that the hotel hired Tananon Co Ltd to clear the area, which is outside the boundaries marked on the resort’s Chanote land title,” he explained.

Mr Cheewapap presented to the resort’s management photographs of the beach before it was cleared as evidence that the plants had been removed.

“I have filed a complaint with the Cherng Talay Police requesting further action,” he said.

The resort is accused of breaching Section 16 of the National Parks Act of BE 2504, which states that it is illegal to “hold or possess land, or clear or burn the forest, do by any means whatsoever things endangering or deteriorating soil, rock, gravel or sand, or carry on any activity for benefit, unless permission is obtained from the competent official.”

Despite the flurry of activity yesterday to protect national park land, Mr Cheewapap declined to comment on the stalled investigation into the alleged encroachment of 3,000 rai of Sirinath Marine National Park.

“We will reveal information concerning that case when officers from the Public Sector Anti-Corruption Commission in Bangkok come to Phuket at the end of January,” he said.

Phuket Airport Terminal X on target to open in February