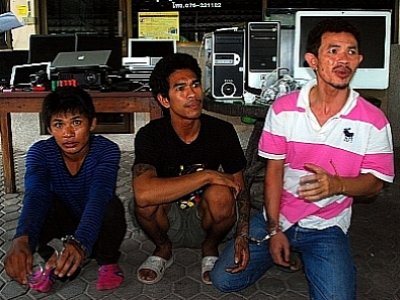 PHUKET: Residents in Phuket’s Thung Thong subdistrict have been trickling into the local police station over the past few days in the hope of reclaiming household goods stolen from their home.

Officers at Thung Thong police on Thursday revealed more than 30 items seized as evidence in the arrests of three men charged with conducting a recent spate of break-ins in the area.

All three were charged with theft by breaking and entering as well as receiving stolen property, said Col Kraithong.

In addition to these charges, Teerachart was charged with possession of a Class 1 drug (crystal methamphetamine, also called ya Ice) with intent to sell as well as possession of an unregistered firearm and ammunition.

Kriangsak was also charged with possession of an unregistered firearm and ammunition, he added.

“We received repeated reports from residents about items being stolen from homes in Thung Thong, and Capt Teeradetch Jiraksa was assigned to investigate,” Col Kraithong explained.

“We knew he was residing at a house on Sakdidet Road in Phuket Town and we arrested him on October 19 [Tuesday] in front of Phuket City Police Station,” said Col Kraithong.

The arrest of Teerachart in turn led to the arrests of Kriangsak.

After questioning the pair, officers arrested Sarawut at a house in Wichit.

“We found many suspicious items in their rooms,” said Col Kraithong.

Among the booty, were cell phones, laptops, computers, video cameras, a DVD player, a homemade gun and cartridges and a small amount of ya Ice, he added.

“Some of the people whose houses were robbed have come to see if any of the stolen items belong to them,” Col Kraithong added.