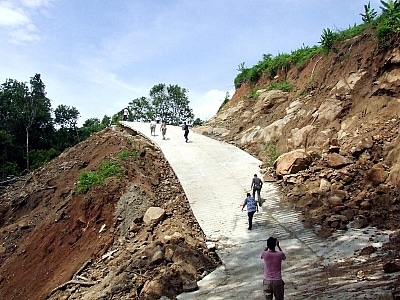 PHUKET: Residents living in the Kok Makham community in Patong, on Phuket’s west coast, were blessed when the developer of a nearby construction project on Wednesday agreed to pay for damages to their homes and to clean up their streets.

Chaianan Ananthanawat, 62, registered with Patong Municipality as the “project owner” of the site, also vowed to have retaining walls built along any steep parts of the area to ensure against any future landslides.

The residents were yet again inundated with water and mud during the heavy rains last week. It was the third time the community had been covered in “mud, sand and rocks” since construction began at the site, said Chatchapol Khamintong, 48, who once served as the community’s elected leader.

The most recent slide damaged homes and left behind sediment about one meter deep, covering the yards and streets, Mr Chatchapol said.

Angry over inaction against the developer, about 100 residents staged a protest last Friday, which resulted in a joint inspection of the site by top local officials on Wednesday.

At the site, Mr Chaianan told the press directly, “We will protect against future landslides by covering embankments with cement and by growing trees on areas already excavated.

“We will also pay for all damages to the villagers’ homes and clear away the debris left behind by the dirt that slid from our site,” he added.

However, in his company’s defense, he said, “We had permission to start the project and we have done everything according to the regulations.”

Work on the safety measures is expected to start within weeks.

“It will take about three days to draw up the plans and then they have to be approved by Patong Municipality engineers. It will take a week for the plans to be confirmed before construction to protect against landslides can begin,” Mr Chatchapol explained.

Mr Chaianan said that installing the barriers would take about three months.

“We will then continue with our project,” he said.

Mr Chaianan is managing director of Thepcharoen Property Co, which is named as the landowner of the 10-rai site.

The company was commissioned by the Maha Bodhisattva Avalokitesvara (Guanyin) Foundation (Bud Jor Patong) to build a monumental statue of the Chinese goddess Guanyin, also known as the “Goddess of Mercy”.

The statue, once completed, will stand 47 meters tall and measure 60 meters across at its base.

“It will be the biggest in Asia,” said Mr Chaianan.

He added that 27 million baht had already been spent on the project.

“The entire development is expected to cost about 500 million baht,” he said.

The statue of the goddess will be covered from head to toe in jade, explained Mr Chaianan.

“It will be about the same size as the Big Buddha, but we will not allow any resorts or other buildings to be constructed up there,” he added.