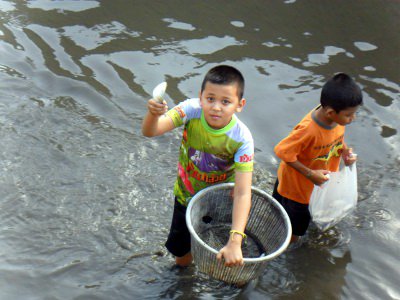 PHUKET: Parents and local residents are calling for action against repeated poisoning of a canal along a major Phuket Town school, killing hundreds of fish.

About 5pm yesterday, residents entered a section of Klong Bang Yai that runs next to Satree Phuket School on Damrong Road and removed hundreds of dead fish.

The water in the canal was black, thick and mixed with an oily substance.

One local resident said this was not the first time that the canal had suffered a mass poisoning.

“Every time this happens the water has a strong bad smell and lots of fish die. The smell gets even worse when the water level drops, and it even makes it difficult for some residents to breathe,” he said.

He and other residents in the area suspect that factories or businesses further upstream are illegally releasing untreated water into the canal.

“This has been going on for a year but no government authority has come down to investigate it,” he told the Phuket Gazette.

However, Anutta Srakaew of the Public Works department said this was the first time she had heard of the problem.

“That section of Klong Bang Yai is Phuket City Municipality’s responsibility. We have contracted Phuket Provincial Prison to keep the canal clean, but we have never received a complaint about the water being polluted before.

“I will report this to the Director of Public Works. I think we will be looking into the problem by inspecting the area tomorrow,” she said.