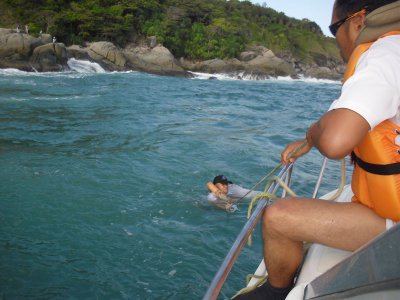 PHUKET: Police have confirmed the identity of a Thai woman who slipped off rocks and drowned at Phromthep Cape late yesterday afternoon as that of Yula Suwan, 20, from Chiang Rai.

“They walked down the cape to take photos on a rock behind a no entry sign. A big wave crashed into the rock she was standing on, and she jumped to avoid the water splashing up onto the rock.

“Unfortunately, she slipped and fell into the water,” he added.

Miss Yula repeatedly tried to swim back to land, but the waves at Phuket’s southernmost tip, where the waters of Phang Nga Bay meet the Andaman Sea, proved too strong – all while sightseers looked on helplessly.

“Rescue workers arrived on a speedboat. It took almost 20 minutes before they could get her out of the water, but she was already exhausted and the waves had battered her against the rocks.

“They administered CPR, but it was too late,” Lt Attawat said.

Police initially had trouble identifying who the woman was, he said.

“We were unable to identify her because all her belongings, which we believed included her identity card, fell into the water and the man she was with did not know her full name,” he said.

The Phuket Gazette this morning spoke to a friend who asked to be named only as “Ae”.

“She often went to Laem Phromthep. Yula liked it there,” she added.