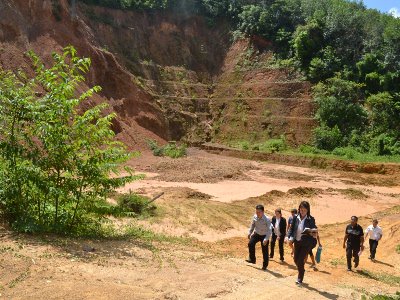 PHUKET: Land owners digging up and selling the earth on their plots in central Phuket has sparked a row from neighbors, who say the extensive excavation work is causing dangerous landslips, for which they are seeking 300,000 baht in compensation.

An investigation headed by Vice Governor Somkiet Sangkhaosutthirak yesterday deemed much of the excavation work on the plot in Srisoonthorn, Thalang, as illegal.

“Our land used to be at the same level, until they began digging,” said Khanitta Mulikabutr, niece of the owner of the adjoining plot, Teunjai Adsin.

“Landslips from adjacent plots have been occurring since November last year, including from our land. Some of our trees have fallen down because of it, so we want them to take responsibility for this,” she added.

Ms Khanitta explained that negotiations had been attempted several times, but failed to reach agreement.

Ms Teunjai, who filed the complaint that sparked the investigation, was seeking 300,000 baht in compensation and demanded that a retaining wall be built to separate the two plots.

V/Gov Somkiet and his team of investigators inspected the site yesterday with the aim of mediating a solution between the parties involved, who include Saowanee Keereekhet and Prapai Mulikabutr, named as owners of the land in question, and Boonkua Sakulchan, the man who organized for the excavation work to be done.

Representing Mr Boonkua, who was in Nakhon Sri Thammarat yesterday, was Panya Keerakhet.

However, Mr Boonkua said he did not have the money to pay Ms Teunjai what she demanded.

“Mr Boonkua would like to offer Ms Teunjai 30,000 baht and the piece of land instead,” Mr Panya said while he was on the phone with Mr Boonkua.

“The land is owned by Ms Saowanee and Ms Prapai. How can he give the land to me? I think they need to discuss this among themselves first,” she said.

V/Gov Somkiet added that much of the excavation work had been done illegally.

“Srisoonthorn Deputy Mayor Nikom said that the OrBorTor [Tambon Administration Organization] gave permission to dig in 2008, but that permit was only for six months,” he said.

“Over the past three years, illegal digging has taken place on this plot on three occasions. Ms Teunjai has reported this to Thalang Police and they will take further action regarding the laws that have been broken,” he added.

As for the negotiations between Ms Teunjai and her neighbors, V/Gov Somkiet assigned the Thalang District Chief and Deputy Mayor Nikom to assist with talks and gather information from both parties.

“I think negotiations can be completed in two days. Once both parties have agreed on the terms, the two men overseeing the talks will take both parties to sign an agreement at the Damrongtham Center,” he said.

Ms Teunjai said she was satisfied with the investigation’s findings.

“If the negotiations do not work, we will proceed in taking legal action against them through our lawyer,” she said.