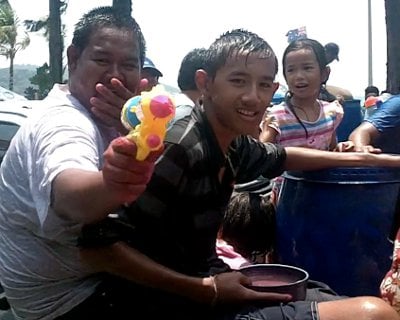 The “seven days” this year run from April 12 to 18, when most businesses close and many people travel to take part in the traditional Thai New year festivities.

The DDPM-Phuket announced on Saturday that their office will lead Phuket rescue organizations and medical staff in a traffic accident rescue drill in Cherng Talay on March 29.

From 10am to 10:45am that day, a mock traffic accident will be staged at the Tesco-Lotus intersection on Srisoonthorn Road.

The simulation will include motorcycles, a songtaew and a six-wheeled truck with an “emergency treatment center” set up in the parking lot of the Tesco-Lotus store.

Earlier that morning, a motorcycle procession will start at the Cherng Talay Tesco store at 9am to promote the ongoing island-wide campaign for all people on motorbikes to wear helmets.

A route map and expected number of vehicles taking part in the procession, which will last until 10:45am, have yet to be released.

Cherng Talay and Kamala Police will be on hand to control traffic and protect safety.

DDPM-Phuket Director San Jantharawong said, “Actually, we practice rescues year-round, but before the [Songkran] festival, we need to make sure that our staff is ready to handle these situations.”

Also in preparation for the upcoming holiday period, the Phuket Regional Blood Center, run by the Red Cross, is conducting a blood donation drive. For details, see our previous report here.