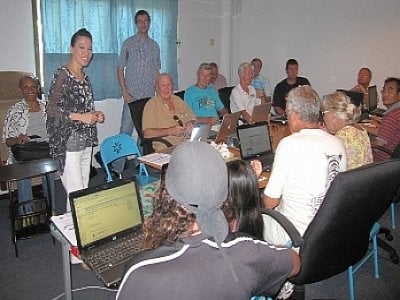 PHUKET: Internet speeds in Phuket continue their roller coaster ride with True and 3BB delivering generally good speeds on international downloads, and TOT’s speeds highly dependent on where you’re located. 3BB had a five-hour outage in the southern part of the island last Thursday.

Expensive TOT Fiber Optic service continues to go up and down: when it’s working, it’s fast, but not as fast as the 10 Mbps True or 12 Mbps 3BB packages, both of which cost one-fifth as much as TOT Fiber Optic.

As always, you can see the latest reports on international download speeds at www.phuketinternetspeed.com. Please join us and report your speeds, too.

The state of wireless Internet

True’s “3G” HSPA wireless internet service along the extreme west coast of the island is still chugging along very well. In fact, our 3G service here in Phuket – when you can get it – is almost as fast as the 4G service in some parts of the US.

PC World recently tested Verizon’s “4G” (LTE) around the US and came up with an average download speed of 6.4 Mbps (see www.bit.ly/fA4GIF). We’re getting 2 to 5 Mbps in tests at various locations on the west coast.

If you don’t live or work on the western edge of Phuket, or in downtown Bangkok, and you want wireless Internet, you’re SOL.

CAT reports that it doesn’t have any EV-DO cards left. CAT won’t sell naked SIMs, so you can’t buy a competitor’s USB dongle and stick a CAT SIM card in it. With the future of EV-DO in Bangkok still in question, and the really bad CAT EV-DO speeds we’re seeing in various locations, it’s anybody’s guess whether CAT will do anything to improve EV-DO.

A friend of mine, Jack, has started sending in periodic reports about the computer hardware that’s available in Phuket.

His reports are full of information about deals that you can’t get anywhere else. I’m posting those on the www.woody.info website.

See Jack’s report for the inside story on what to buy and where – and a bonus story on cleaning your notebook.

Able Wanamakok’s first Facebook seminar had everyone begging for more. Dubbed Facebook 101, she takes attendees through the basics, from setting up a business (or organization or charity) page, to designing it, drawing attention to it, and then using the page to reach out to Facebook users.

The seminar runs three sessions, on consecutive Saturday mornings, and don’t assume any prior knowledge of Facebook.

The first seminar was fully booked shortly after it was announced. Able’s considering running a second seminar, starting in mid-April. That one will probably book up quickly, too.

The seminars are sponsored by Khun Woody’s Sandwich Shoppes, the Phuket Gazette, Able’s AW PR and Marketing, and Johan’s onsite.in.th .

The next Phuket Computer Clinic meeting will be on Sunday, March 27, from 10am to midday at Sandwich Shoppe Chalong, one kilometer north of Chalong Circle on Chao Fa East Road.

As always, the Clinics are free, and open to anyone interested in (or bothered by) computers in Phuket. There’s a lengthy question and answer period, and lots of help from kindred souls: if you have a question about computers in Phuket – or PCs in general – drop by and we’ll get you some world-class answers.